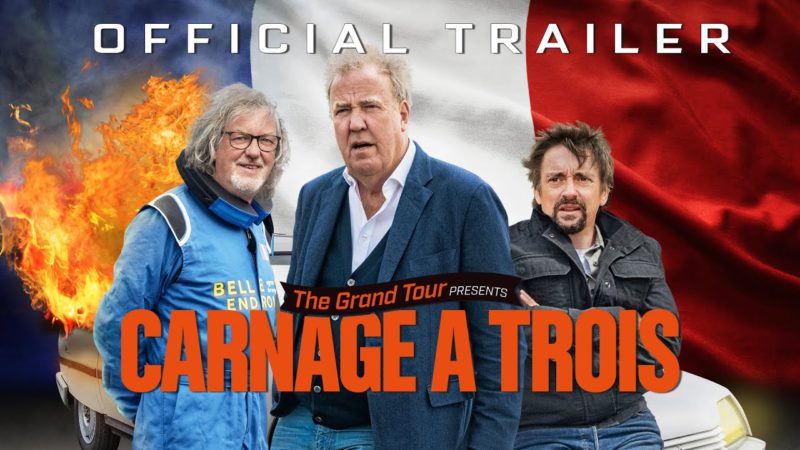 It’s time for all the fans of Hammond, James May, and Jeremy Clarkson to rejoice because The Grand Tour is returning back to our screens, and that too with a follow up to the lockdown special. The best part? we know and where it will be heading up with the trio.

In Carnage  A Trois all the three characters will be exploring the bizarre world of French car culture. They are also going to start the Welsh hills and will reach the English channel for an epic climax. In addition to that The Grand Tour has also released a very big trailer that showcases what we can expect from the special series.

If you are also a fan of this series and were waiting for this one then here we have collected everything that we know about The Grand Tour: Carnage A Trois.

Luckily we have got confirmed news and that is that The Grand Tour: Carnage A Trois will land on Amazon Prime Video on 17th December 2021 Friday. The news was confirmed by Richard Hammond on This Morning sofa earlier this year when he was asked about the series and he said that it will be returning very soon.

He said: “Well this is part one of a two-part series of two shows that we did while we weren’t able to travel to the other side of the world and had great fun doing.

“I can’t tell you anything about the second one or I’ll get shouted at,” he added.

Plot Of The Grand Tour: Carnage A Trois

In The Grand Tour Presents: Carnage A Trois, the trio James, Jeremy, and Richard will head on a road trip that is across the United Kingdom while exploring some of the most bizarre worlds of French Car Culture. When it started in the Welsh hills, they will try to even drive through a mountain, defusing bombs, looking at the propeller powers cars and so many more adventures that will even include helicopters.

Besides that, the trio will also make their way out from the race of their lives to the English Channel where the three will participate in the epic medieval climax. It is named Consider us Sold. It was also said in many reports that even before when the film was not announced, the trio James, Jeremy, and Richard were spotted driving beautiful and vintage French cars in Wales by fans earlier this year in April.

Afterward, media portals started reporting the stories of how Clarkson, Hammon, and May were causing so much traffic at Shires Retail Park in Leamington. In fact, in a report, it was also written that one driver would get out of his car to shout at Hammond.

However, as per the reports from another media portal, the police were called on Richard Hammon in Crickhowell when he was seen trying to fit his car into a space that was quite small for it. But after the end, the residents of that particular area actually found out that this was all a part of a stunt for The Grand Tour series.

Of course, we cannot even imagine Thr Grand Tour without its three lead characters that are Jeremy, Richard Hammond, and James May. Now we can expect them to appear in the upcoming special series. As far as surprising cameos are concerned we will have to wait for that and to see whether the upcoming episode of the series will surprise us with any new or exciting guests or not.

Watch the trailer for The Grand Tour Presents: Carnage A Trois below:

Read Also  From Dr No to No Way To Die: the entire James Bond filmography came to streaming

Tiger King 2 on Netflix: Release Date, Time, and Everything you need to know