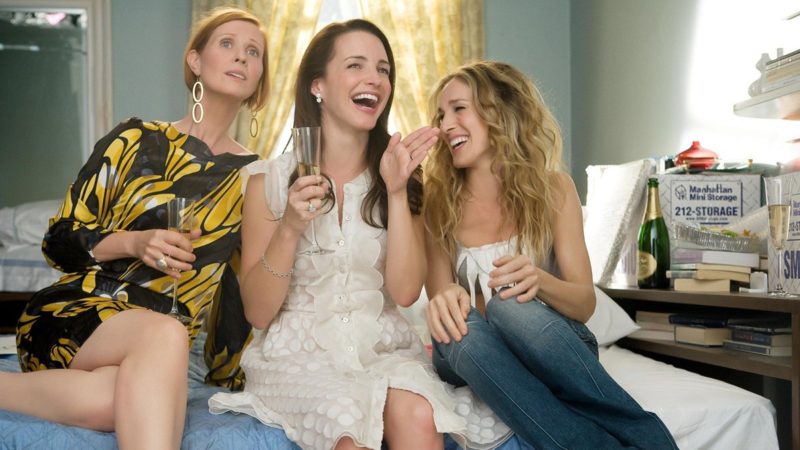 In relationships, as with celebrated television shows, some of us find it incredibly hard to say farewell to a loved one. Talk of a Sex and the City return to the small screen has been the staple of conversations among housewives and women of a certain age (and other groups who love the show equally) ever since the last episode of the show aired in February 2004.

Two movies followed the tv series, and these were questionable in terms of quality but still roped in the dollars (by all accounts, a third film was canceled after Kim Cattrall disapproved of the direction her character was heading in), and now a new look SATC is on the horizon.

And Just Like That will premiere on HBO Max in early December and is sure to be a big hit, mainly because there’s an audience that will lap it up, even if it fails to hit the heights that the original show hit during their nadir.

One crucial difference between the original Sex and the City and its new incarnation is the absence of Samantha Jones (Kim Cattrall), and it will be interesting to see how they deal with her departure and what they do in order to bring in characters that can go some way to filling the hole that has been created.

Fortunately, one character that will, of course, be front and center comes in the form of its location. New York has always been a key part of the show, and we’ve seen that shooting has been taking place on the familiar street corners. Therefore cinematic stock footage will not be needed to place the audience among the hustle and bustle of the city that never sleeps.

The films that followed the show’s finale were good fun that was geared at, let’s be honest, milking the last dime from the fans who follow the show religiously. However, they didn’t have the same magic as the TV show, and the producers of And Just Like That will hope that they can capture some of that gloss and, in doing so, retain their fanbase while also looking to bring in a new, younger audience, with the use of new characters.

One thing that And Just Like That and Sex and the City don’t have in common is the era they were released in. In many ways, SATC existed in a bubble where there wasn’t anywhere near as much in the way of competition, but And Just Like That is going up against a near endless list of shows and streaming services, so the chances of the show getting anywhere near as large an audience is touch and go.

The barriers that SATC smashed down in the late 90s and early 00s weren’t just symbolic; it would be fair to say that some shows wouldn’t have even been made but for its success. Show’s like The L Word, Killing Eve, Fleabag, Orange is the New Black may have found it hard to find a home on mainstream television without the legwork put in by Sex and the City.

SATC not only championed women as the leads in their own story, but it also did so in an unflinching fashion, and there’s a lot at stake with its latest iteration, a lot of hard work could be undone by a sub-standard show, so one can only hope that is a fear that no one has to contend with once the show gets going.

Another obstacle to overcome comes in the form of time itself. Sex and the City was groundbreaking for many reasons. It brought up issues and discussions that had never been had on a mainstream television show. It was ahead of its time and not afraid to court controversy, but in 2021 it looks pretty plain and, dare we say it, vanilla in comparison to what’s aired now.

Will And Just Like That look to push the envelope, knowing that doing so could make them look desperate, or do they look to grow old in a manner more in keeping with Charlotte than Samantha?

This also brings up something of a delicate situation. The reason the show was such a stand-out success, and truly of its time, had a lot to do with the age of the lead characters and the way they dealt with the relevant challenges of the period of the lives they inhabited on screen.

Given that the characters, and actresses, are now closing in on their 60s, one does wonder quite where the show will go. If it tries to stay true to life, then it could be genuinely interesting to see the approach the showrunners take. However, if it’s a case of the four characters looking to recapture their relative youth, then things could get messy.

Indeed, if the show were to go down that road, then the one character who would have legs would be that of Samantha, who arguably was the most interesting of the bunch in the first place.

Clearly, the And Just Like That will be a success in viewership terms; how can it not be? Any worldwide hit that returns after a lengthy layoff is going to generate interest and an audience, but whether it’s the type of success borne out of actual quality and not sentiment and loyalty remains to be seen.

There is also an additional fear that it could prove something of a car crash that would taint the overall feeling towards the original show. Until the show airs from December 9th, we won’t know, but we’ll be sure to tune in to find out what’s happening with Carrie, Charlotte, and Miranda.