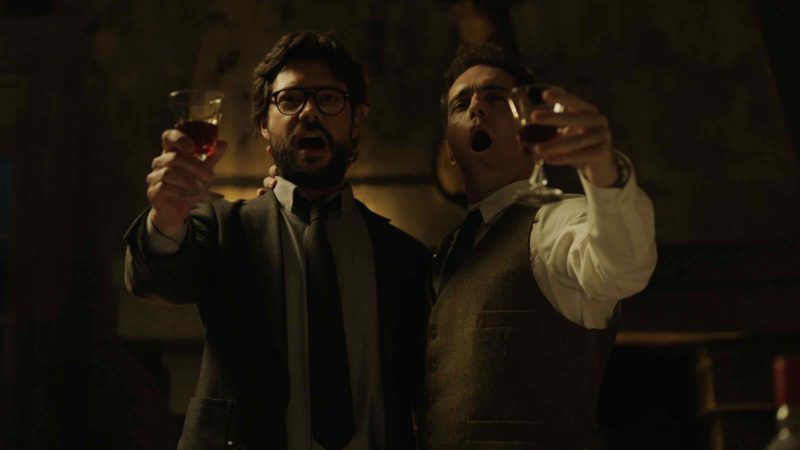 Bella Ciao, a hymn about resistance, courage, and freedom, gains new fame as a song in “Money Heist” and shows how bank robbers become heroes.

Since the first episode, “Money Heist” has been giving you goosebumps on a regular basis. But there is hardly a scene that brings more drama into the living room than that in the Casa de Toledo, where the professor and Berlin play Bella Ciao together on the evening before the attack.

Are you longingly waiting for more goosebumps?

The story of Bella Ciao.

The story of the song Bella Ciao can be traced back to the beginning of the 20th century. The resistance anthem was officially documented for the first time in 1906. At that time, Italian rice pickers sang the catchy melody and criticized the almost unbearable working conditions. But one day, they hoped, they would live in freedom.

During World War II, Italian resistance fighters, known as partisans, took over the melody for their anthem in the fight for freedom against fascism. It is not known who wrote the text.

Even today, the old partisan song from Italy is considered one of the most important pieces of the communist and social democratic movement.

The song Bella Ciao occupies a particularly important position in the Spanish Netflix series “Money Heist”. Like so many, the professor’s grandfather went to war against the Nazi state. After the war ended, he sang Bella Ciao to the childhood professor – and the professor later taught it to his team. Since then, the bank robbers in Rio, Tokyo. see themselves as resistance fighters and, if in doubt, are ready to die for their project.

“The professor’s life revolved around one single thought: resistance,” explains bank robber Tokyo. The credits of the 13th and final episode of season 1 show numerous scenes of resistance from different epochs of world history – of course with Bella Ciao.

“Money Heist” song hit the charts as a remix hit.

If you can’t get enough of Bella Ciao, you should look forward to the modern reinterpretations of the music industry. Even if different interpreters have changed the text and meaning a lot, Bella Ciao is and remains one of the most successful songs of recent years thanks to “Money Heist”.