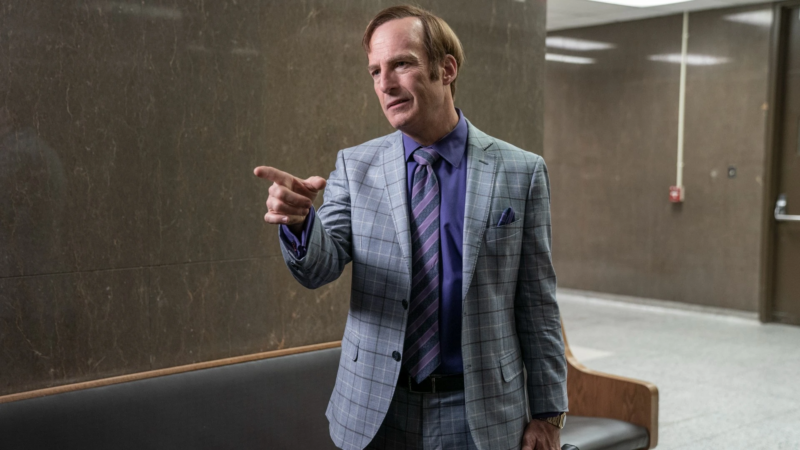 Walter White, AKA Heisenberg, played by Bryan Cranston, brings you along on his sympathetic journey to make his family enough money to live off of after he is diagnosed with lung cancer. To do this, he teamed up with Jesse Pinkman, and the two of them created and destroyed the greatest drug syndicate that New Mexico had ever seen.

They made even more money than a big fancy Vegas red casino. Along the way, there were plenty of other incredibly well-written villains, like Mike, Gus, Lydia, Todd, Hector, and that evil mastermind, Huell.

However, when those villains tangled with the law, who was it they turned to help? Who was there to uphold their rights? Did you know you had ‘em? The constitution says you do. That’s right, the criminal… lawyer himself, Saul Goodman. Who ya gonna call?

He was so popular, he ended up getting his own spinoff back in 2015. Now in 2022, Better Call Saul has wrapped up its season 6 series finale, and it was a trip. I won’t bury the lede either: Watch “Better Call Saul”. It’s easily one of the best shows I’ve ever seen.

Now, I’m not sure how much I should talk about here because there’s a lot that I want to get into, but I also don’t want to spoil anything. Er, I guess I’ll just do my best and try to save what I gotta say till later.

After the events in Breaking Bad, we catch up with Saul Goodman hiding from the law in… somewhere. He’s grown out a mustache, wears glasses, works in a Cinnabun, and calls himself Gene. From there, we bounce back to the past, wayyyy before Breaking Bad, to the life of a certain Jimmy McGill… the man who would eventually become Saul Goodman.

He’s a new, fresh, upcoming lawyer taking pro-bono cases in order to try and build up his repertoire of cases. When he’s not busy lawyering, he takes care of his brother Charles (“Chuck”), who suffers from Electromagnetic Hypersensitivity (he’s allergic to electricity)- and yes, it’s treated like the serious mental illness that it is. Jimmy hates Howard Hamlin with a passion, the man who co-founded HHM, Chuck’s law firm, because Jimmy hates that Howard… well, there’s a lot of reasons. Some of them justified, some of them not.

From there, we see how Jimmy’s life slowly spirals into the swindling lawyer we all know and love, Saul Goodman.

In parallel to this, we see the rise of Gus and Mike, and how they became significant powers by the time Breaking Bad rolls around. Oh, you remember that one line from Breaking Bad about some guy named “Lalo”? No spoilers buuuuuut….

Vince Gilligan’s writing is simply top-notch. The characters all have a depth to them that most shows can’t pull off in even a single character. While doing research for this article, I found entire forum posts discussing character motivations, with posts several paragraphs long about the nature of guilt and revenge. The dynamic between all the main characters is tense, and we see how the characteristics that make our protagonists so good at what they do become the very weaknesses that lead them to their own downfalls.

Also, there are none of the typical Hollywood tropes plaguing this show. There’s never a turn-to-camera moment where the show goes, “Men, am I right?”, there aren’t any token minorities, and the show never bashes Caucasians for being white. The villains are allowed to show that they are villains… because of the villainous things they do, not because of their immutable characteristics. Kim Wexler, Jimmy’s friend and confidante, is one of the best female characters ever put to screen that isn’t an action hero- my point being that not all women in movies need to be gender-swapped male archetypes. Kim is the perfect example of such a character.

While the writing is superb, the pacing of this show may make or break the viewing experience for a lot of people. As the tension ramps up throughout the early seasons, its most certainly a slow boil. It takes a longggg time for Jimmy to become Saul, and the early seasons move at a snail’s pace.

It’s probably this shows biggest weakness. On the other hand, that means that Better Call Saul actually takes the time to build up its biggest plot points. But on the other, there are scenes of characters staring at nothing, swigging beer and saying nothing. I get “show don’t tell”, but… well, maybe it’s my zoomer attention span that’s the problem.

The ‘Sort of Spoilery’ Spoiler Zone

From here on out, I will be delving into spoilers. I’ve already given my recommendation – I just want to gush for another, oh, 500 or so words. So if you haven’t watched Better Call Saul, here’s where I recommend that you stop reading, you boot up Netflix, Hulu, or whatever your preferred streaming service is – and while I do not condone pirating content, land ho me hearties – and watching it through.

Any stragglers still here? No? Okay, here we go.

Saul and Kim end up forming an incredible “power-couple” dynamic, and I love it. For the uninitiated, “Power-couples” are characters in a relationship whose personalities and abilities complement one another, and push them to heights neither would achieve alone. In a way, its sort of the ideal relationship.

In storytelling, characters in such relationships attempt to take over the world. At the same time, most movies and shows never show characters in this kind of relationship, because most of them can’t write a relationship that lasts past the dating stage to save their lives. Most shows live in a perpetual “will they, won’t they” superposition. Until they do, and then the show ends. Or they break up, to return to the “will they, won’t they” stage.

Saul and Kim, on the other hand, feed off one another’s energies. This is exemplified in the last season when the two of them run rings around another character in order to ruin that person’s life. It’s so unique and so cool to see a relationship between characters that makes them dangerously competent, and it all culminates in a finale that ends with a bang.

Seriously, I read through Buzzfeed lists in order to try and find a comparable couple. Buzzfeed! And the only example that even came close (in the complete opposite direction) was Mr and Mrs Ingals from Little House in the Prarie. Every other example were characters that came together because the story said they should, and the characters just kind of… ended up together, rather than complementing one another. That’s more realistic, sure, but fiction is fiction, and it’s just interesting that this aspect of character development isn’t explored so much.

Oh yeah, there’s this whole B-plot with a new character named Nacho which is great too. We get to see someone at the bottom of the food chain of the cartels really get shafted for his life decisions. It’s tragic, thrilling, and exciting.

Gwyneth Paltrow admits getting Botox in her 40s was ’embarrassing’