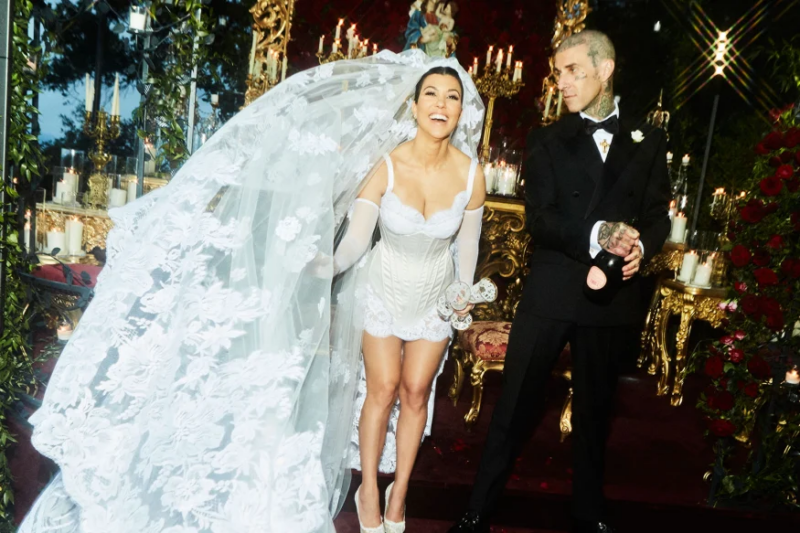 The year most marked by love was 2022, as many of the world-famous and celebrities said “yes” at the altar, revolutionizing the media and fans. Some chose to hold large ceremonies, where they could share all the details with their followers, while others chose to keep them more intimate and private.

Among the most relevant are the union of Kourtney Kardashian and Travis Barker, also that of Britney Spears and Sam Asghari, and the wedding of Jennifer López and Ben Affleck could not be missing. Thanks to their great celebrity celebrations, in which they wore dresses from renowned designers and others, they managed to give a lot to talk about.

Learn here what were the details of these and more celebrations.

This wedding celebration was certainly high. Kourtney Kardashian, the 43-year-old reality star of The Kardashians, along with her 46-year-old partner, Travis Barker, the drummer for the band Blink-182, decided to celebrate their great love at three weddings, two of them a little more private.

The first wedding was for fun and took place in April in a Las Vegas chapel, at that time they did not have a license to marry. For this reason, in May, the couple decided, for the second time, to get married and legalize their union in the Santa Barbara court.

At the end of May, the eldest of the Kardashians and the musician carried out their third wedding in one of the castles of Domenico Dolce and Steffano Gabbana, in Portofino, Italy, in a spacious and luxurious space that gave rise to the great celebration, allowing many family, friends and celebrities to attend.

It is one of the most anticipated weddings by the followers of the Montaner family. At the beginning of January, Stefi Roitman and Ricky Montaner celebrated their marriage at the Haras Dok in Argentina, a dream place characterized by its architecture and beautiful green areas, perfect complements for the celebrations.

The particular thing about the ceremony was the secret code. The guests had to confirm their attendance in order to receive the detailed location of the ceremony, but in addition, the attendees were not allowed to use their smartphones, so they had to leave them in a locker before entering the celebration.

This was one of the most criticized weddings, after it was revealed on a television program that the marriage would not have been legal because the bride and groom did not sign the civil marriage booklet. However, Ricky and his wife denied the rumors with a photo capture that they published on Instragram, in which their names can be seen next to the word ‘married’.

The next couple to get married was the famous actress from the RBD band, Maite Perroni, and the television producer, Andrés Tovar.

This wedding turned out to be very surprising, since it took place in mid-October, weeks after announcing their engagement.

The wedding was held in Valle de Bravo, State of Mexico, in the company of their closest relatives and friends. The most iconic thing about the wedding and what many fans of the soap opera “Rebelde” were waiting for was the reunion of some members of the cast.

The only ones who attended the wedding were Anahí, Christián Chávez and Christopher Uckermann, but this did not prevent the three of them, in the company of Maite, from singing, enjoying and dancing to the ‘RBD’ classics.

“That nostalgia! I love you, soul brothers. What a gift to the heart to hug us very tight. We are missing two! @dulcemaria @ponchohd ”, Anahí published on her Instagram account.

The actress and the American film director could not be left out either.

Three months after getting engaged for the second time, Ben Affleck and Jennifer Lopez held their weddings in two wonderful places. One of them in Las Vegas and weeks later a second celebration at Affleck’s private mansion in Georgia.

This has been one of the weddings that has given a lot to talk about because after 20 years of separation, they decided to get back together and this time swearing eternal love.

After years of relationship and after being released from her father’s guardianship process, the pop singer, Britney Spears decides to get married, for the third time, with her boyfriend, the dancer Sam Asghari.

The ceremony took place in one of the singer’s houses, in California, where they were accompanied by a small group of friends and closest acquaintances, including: Paris Hilton, Drew Barrymore, Madonna, Selena Gómez and Donatella Versace, the renowned designer, who on this occasion dressed Britney Spears.

After a year of being engaged, Taylor Lautner decided to marry his girlfriend of so many years. The couple chose to hold a much more intimate and private celebration, in which only 90 people were among friends and family.

As expressed by Lautner, the decision to have a small celebration was Dome’s idea: “He always told me that he didn’t want anything big or elaborate; she preferred something intimate,” she commented.

On November 11, 2021, with the help of his friend and personal assistant, he organized the perfect proposal for him. “We covered the kitchen with hundreds of roses and candles, and the place was barely recognizable. When he got home from his event, he was in for a big surprise,” the actor expressed.

After exactly one year, on Friday, November 11, 2022, as agreed, they carried out their union.

Jennifer Aniston reveals how often she washes her hair