Boyd Gaming Co. (NYSE:BYD) VP William R. Boyd sold 53,110 shares of the business’s stock in a transaction dated Wednesday, October 28th. The stock was sold at an average price of $31.52, for a total transaction of $1,674,027.20. Following the completion of the sale, the vice president now owns 27,792 shares in the company, valued at $876,003.84. The sale was disclosed in a legal filing with the Securities & Exchange Commission, which is available at this link.

Boyd Gaming (NYSE:BYD) last released its earnings results on Saturday, October 31st. The company reported $0.38 earnings per share for the quarter, beating the Thomson Reuters’ consensus estimate of $0.20 by $0.18. Boyd Gaming had a negative return on equity of 1.07% and a negative net margin of 2.71%. The company had revenue of $652.20 million for the quarter, compared to analysts’ expectations of $599.68 million. During the same quarter in the previous year, the business posted $0.39 EPS. The business’s revenue for the quarter was down 20.4% on a year-over-year basis. On average, equities research analysts anticipate that Boyd Gaming Co. will post -0.18 earnings per share for the current year.

Featured Article: Does the Dogs of the Dow strategy work? 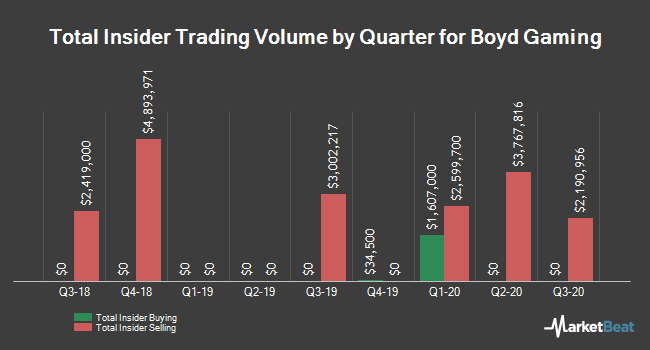