Bridgerton Season 2 Release Date, Plot, And Everything you need to know 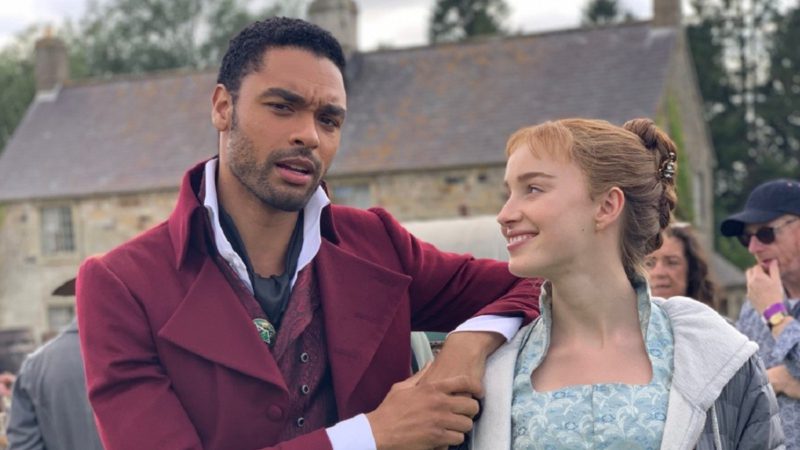 Bridgerton is perhaps the only program that has ever made us fantasize about puff-sleeve dresses, peach-hued ribbons, pearl earrings, and even towering powdered wigs.

We have not gone a day without hearing the word “Bridgerton” spoken from the lips of coworkers and acquaintances who are collectively enamoured with the show’s beautiful set locations and costumes since its debut on Netflix on Christmas Day last year.

Netflix said in early January that the program would ‘court’ more than 63 million homes in its first four weeks, making it one of the most popular original series to date.

However, on January 27, Netflix confirmed the show had become the platform’s biggest ever launched series – outranking Stranger Things, The Witcher, and The Queen’s Gambit – reaching 82 million. As per Deadline, this accounts for 41% of Netflix’s total customers.

In January 2021, Netflix (actually, Lady Whistledown herself) announced Bridgerton’s return for season two. The actors started shooting the second season in the spring of this year, and as per nylon.com, Bridgerton season two will be published on Netflix in 2022 if everything goes well with production (pandemic allowing).

The first series got overwhelmingly positive reviews from reviewers and was a huge success with viewers. However, the production has been hampered by COVID, with shooting being stopped twice after staff members tested positive for the virus. Filming on the series began on August 3, so hopefully, the production break has not pushed the presently undetermined release date back too much.

Read Also  Kingdom: Ashin Of the North: Release Date, trailer, and other details

Simon Basset (Regé-Jean Page) and Daphne (Phoebe Dynevor) will no longer be the primary stars of the program since their dispute has been resolved and they are blissfully making kids at Clyvedon Castle. Nonetheless, Dynevor will reprise her role as Daphne as a supporting character in her elder brother’s love story, even though Page is – at least officially – out as the Duke, with his exit from the program announced in April 2021.

Jonathan Bailey (Anthony Bridgerton) will feature as the main character in the second season, with Simone Ashley as his prospective wife (Kate Sharma). Charithra Chandran, a newbie, will portray Edwina Sharma, Kate’s sister, who also plays a crucial part in Anthony’s love story. Lady Mary Sharma, the girls’ mother, will be played by Shelley Conn, who was previously involved in a controversy, while Calam Lynch will portray rebellious printer’s assistant Theo Sharpe.

Meanwhile, Merlin actor Rupert Young will join the series in season two. According to Deadline in April 2021. Young will portray ‘Jack,’ the most recent addition to the ton. The Bridgerton cast for season two is also expected to include Julie Andrews as Lady Whistledown voice, as well as the return of Golda Rosheuvel (Queen Charlotte), Nicola Coughlan (Penelope Featherington), and the rest of the core cast, which includes, Polly Walker, Ruth Gemmell, Adjoa Andoh and Claudia Jessie.

It remains to be seen if Marina Thompson (Ruby Barker) reappears in the narrative after marrying her deceased lover’s brother in order for her pregnant child to be born in wedlock. The two were last spotted leaving Featherington House in a car. (Fans of the books will recognize Marina Thompson as a pivotal character in Eloise’s narrative, even though we never meet her in the novels). Ben Miller, who portrayed Lord Featherington, will not be returning. Or, more accurately, the late Lord Featherington.

Trailer for Season 2 of Bridgerton

You can get a first peek at our season two core pair right here.

Kate Sharma (Simone Ashley) visits Anthony Bridgerton in the footage, which was revealed at Netflix’s fan event TUDUM, and their conversation is chilly.

Season one is based on Julia Quinn’s book The Duke and I and is Shonda Rhimes’ (aka the genius producer behind Grey’s Anatomy and Scandal) first collaboration with Netflix.

Those who binge-watched all eight episodes of the program saw debutante Daphne Bridgerton (Phoebe Dynevor) navigate ‘The Season’ in Regency London, rubbing elbows with the top crust of high society in the hopes of snagging a marriage proposal from a handsome and rich suitor. Soon after, Daphne encounters the Duke of Hastings (Regé-Jean Page), prompting numerous yearning glances and passionate touches. Oh, and do not forget Lady Whistledown, a Regency counterpart of Gossip Girl, who ignites the gossip mill with her Society Papers, creating social upheaval.

What is the storyline of Bridgerton Season 2?

It is worth noting that the first season was based on Quinn’s debut novel, The Duke and I, which follows Simon Basset (also known as the Duke of Hastings) and Daphne Bridgerton’s romance.

In Quinn’s second novel, The Viscount Who Loved Me, Daphne’s brother Anthony Bridgerton (Jonathan Bailey), along with his relationship with a lady called Edwina and Lady Whistledown and her Society Papers, becomes the centre of the story.

The season will chronicle a relationship between Anthony Bridgerton and Kate Sharma, who initially hates him but can be won over, according to Netflix’s first look.

After her character thought she had figured out Lady Whistledown’s real identity at the conclusion of the first season, Golda Rosheuvel, who portrays Queen Charlotte on Netflix’s series, offered her two cents on what she would want to see in season two.

Here it is all about season 2 of Bridgerton; keep an eye on our page to get the latest update of the releases!

Britney vs Spears Release Date, Trailer and Other Details