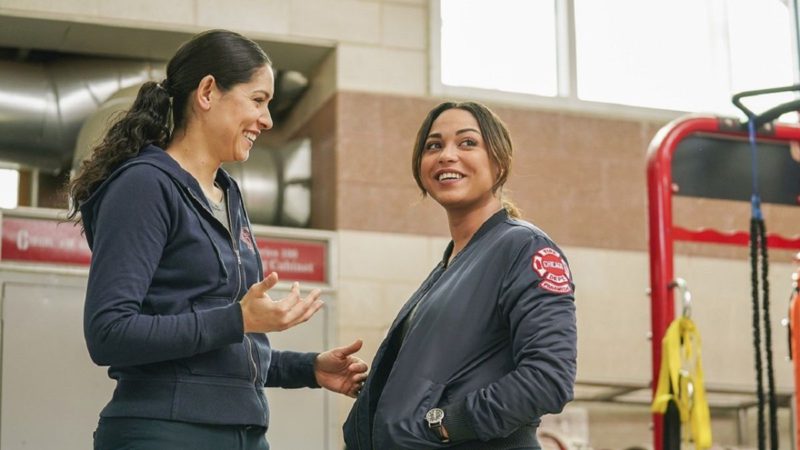 The final episodes of season 10 of Chicago Fire prepare to show the wedding of the popular couple, Kelley Severide (Taylor Kinney) and Stella Kid (Miranda Rae Mayo), which fans have dubbed Stellaride. However, one of the big questions is whether they will be able to see Gabby Dawson (Monica Raymund) return to be present at the wedding, which is why the producers have revealed what will happen and her possible participation.

Let us remember that Gabriela “Gabby” Dawson left the fire station to lead a rescue and relief unit in Puerto Rico, where her family is from. It was a devastating blow to Chicago Fire fans to see her leave, but as procedural viewers know all too well, someone may leave temporarily, but she is always part of the family.

After Dawson’s departure, she’s returned a few times over the years to say hello and catch small “romantic” moments with ex-partner Matthew Casey (Jesse Spencer), and it’s natural for audiences to wonder when she’ll be back again. , especially now that two beloved characters will have a wedding very soon.

The Chicgo Fire series has been brewing for a while now for a pretty significant development between Kelly Severide and Stella Kidd, specifically since Season 4 of the drama. So Gabby was very helpful in bringing the couple closer in each of the seasons before her sad departure. Now that the premiere date for the last episode of season 10 has been revealed, the question is whether she will attend their wedding.

The showrunners have even been whipping up audience anticipation, answering fan questions about One Chicago Day, an annual day when the NBC television network celebrates all things related to its One Chicago franchise. In this event, producer Derek Has answered about the characters that will return.

“We are very excited to try to [Matthew Casey] come back for this ending. I think Casey shows up for a finale, a wedding, whatever’s going on would be fantastic.”

Recall that Matthew Casey’s actor, Jesse Spencer, left the show in season 10 during episode 5 titled “Two Hundred”, when he leaves for Oregon to take care of the children of Andrew Darden (Corey Sorenson) who was the first character to die in the first season of the drama.

Read Also  Game of Thrones: Maisie Williams transforms in the trailer for her new Hulu series

Regarding Gabby Dawson’s return for the Stellaride wedding, the producers didn’t reveal any details, but there is a possibility that actress Monica Raymund will also appear only on the day of the wedding, so it would be a real pleasure for the public to see them. together on screen once again.