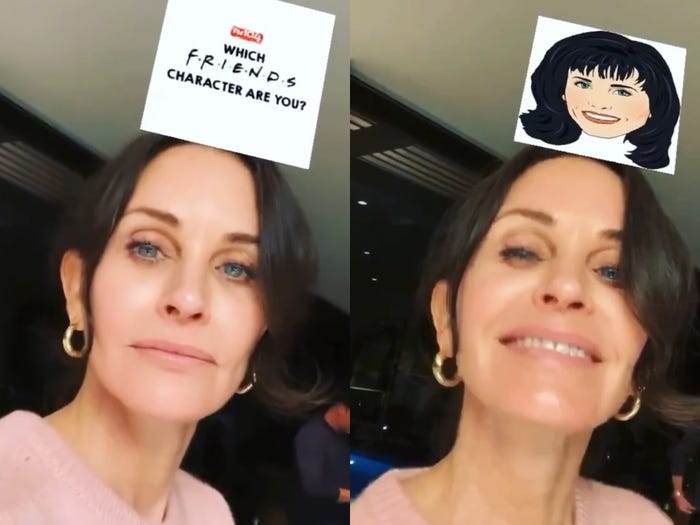 “Friends” is still one of the favorite sitcoms of fans around the world and after 25 years of its premiere, it has fans who cheer for the reunion chapter that premieres on HBO Max. The character of Courteney Cox in the series, as “Monica Geller” stole everyone’s heart thanks to the peculiarities of her personality and the habits that the actress copied in real life.

Through her Instagram account, the actress revealed all the similarities she has with the maniac of cleanliness and order. As she has done before, Courteney Cox resorted to a fun video to show that she is more like Monica than previously thought, as she has entire sections dedicated to different products she uses.

“Tell me that you are Monica without telling me that you are Monica,” Courteney Cox is heard saying at the beginning of the video on his Instagram, and then appears with samples of order and cleanliness at home. “I know,” she says at the end. If you are a fan of “Friends” you will remember that this was one of the phrases most used by Monica Geller. “Am I the only one?” The “Friends” star asked in the description.

There is excellent news for fans of “ Friends ” now that according to reports from the celebrity press, the reunion chapter will begin filming next week. The reunion of Rachel, Joey, Ross, Phoebe, Monica, and Chandler is more than a year late, but everything indicates that it will be official very soon.

According to People magazine, the original cast members – Jennifer Aniston, Courteney Cox, Lisa Kudrow, Matthew Perry, Matt LeBlanc, and David Schwimmer – will be heading to the show’s original soundstage on the Warner Bros. Studio lot to begin filming. the special next week. Meanwhile, from HBO there is no confirmation so far.