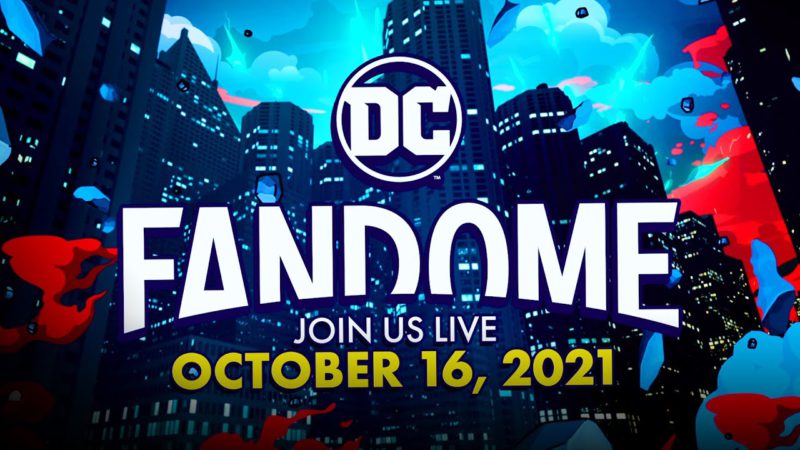 So finally DC FanDome hours of free panels are back with previews and performances. With several teasers and updates from highly anticipated projects, it is coming back.

This event is a great collection of programming that is attached to all the DC properties across different platforms. All the fandom content will be available for a 24 hour period beginning from October 16th at 10:00 Am on the event website as well as Twitch, Facebook, Youtube, and Twitter.

Out of the entire list, one thing which tops the list is the new trailer for ” The Batman” which is set to premiere on March 4, 2022. The film is directed by Matt Reeves and stars the ultimate Robert Pattinson as the main titular hero with Zoe Kravitz as Catwoman and Paul Dano as the Riddler. Here are all the news and trailers below.

The amazing and new trailer of the show looks at Catwoman, Riddler, Penguin, Alfred, and Robert Pattinson’s Batman beating up all the thugs and taking a lot of bullets.

Dwayne Johnson showed off the first footage from his anti-hero movie where he electrocutes a man directly into dust. See it from the link below:

He is ruthless.
He is unstoppable.
He is the reason the hierarchy of power in the DC UNIVERSE is about to change.

“Aquaman and the Lost Kingdom”

In the first look of the move, multiple versions of the Scarlet Speedster team are visible. they also team up with Sasha Calle’s supergirl to head directly to the multiverse. In the teaser, we can see Michael Keaton’s Batman cowl also making a brief appearance.

“Sweet Tooth” which stars Christian convey comes with a video that answers fan questions about shooting in New Zealand. He also shares what he hopes to see in season 2 of Netflix and lots more.

Season 3 of “Pennyworth” which follows the early adventures of Batman’s butler Alfred is now coming to HBO Max as an original series.

Catwoman also voiced Elizabeth Gillies’s attempts to steal a priceless gem and finds herself pursued by Batwoman and all the other villains in this amazing anime-inspired film. it will be available to stream on HBO Max.

There’s a new trailer for “Young Justice: which shows some of the grown-up heroes in action. The first two episodes are now available to stream on HBO Max. New episodes will be released every Thursday from October 21.

This is coming as a Spin-off show from James Gunn’s film The Suicide Squad where we will see John Cena return as his homicidally patriotic hero. In the first teaser for the show, Peacemaker teams with other fights, vigilantes in his underwear, and hugs a bald eagle.

DC also announced their new Milestone initiative which is a bid to identify new writers and artists with a diverse background in the comic book industry. The effort is to nod to Milestone Media and to line up the iconic world of comics that was devised by black creators in 1990.

In the recently added video, you can go behind the scenes of the Kent family home with “Superman & Lois” which stars Elizabeth Tulloch and Alex Garfin as the main leads.

Stargirlf finds herself in a black and white purgatory in this sneak peek video.

Doom Patrol is coming up with a new season 4 on HBO Max and the show has also released a new trailer for the remaining episodes of season 3.

DC on Twitter: “.@TheCWNaomi is in the building! Check out this first-look clip at the upcoming series from @ava and Jill Blankenship, starring @kaciwalfall, straight from #DCFanDome. #NAOMI https://t.co/n4Jt7d5JDX” / Twitter

The psycho villain and Batwoman will team up in the new trailer for season 3 of the CW series. A second teaser also goes in-depth with the comic book character.