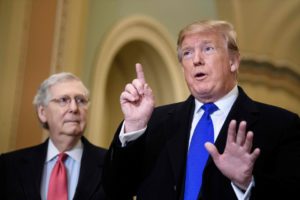 Former US President Donald Trump is under investigation under the Espionage Act after “top secret” documents were seized from him in an FBI raid on his Mar-a-Lago residence in Florida.

According to various reports, one of the document lists would be marked with the legend “TS/SCI” -which stands for highly secret or highly sensitive information-, which is a level reserved for documentation that could cause “exceptionally serious” damage to the United States security.

The items removed include more than 20 boxes, photo folders and a clemency letter written on behalf of political strategist Roger Stone, a longtime Trump ally.

A few days ago, FBI agents raided the tycoon’s home in search of classified nuclear weapons documents that Trump may have taken from the White House while he was president of the United States. Texts with information about the “president of France” were also recovered, although it is not clear what they are about.

For his part, the former president stated in a statement that the documents seized by the agents had no classification. He also argued that he would have turned them over to the Justice Department if asked.

Donald Trump denies doing anything wrong, prompting his spokesman to say the raid was “outrageous.”

The order notes that the locations searched at Mar-a-Lago include an area called “Office 45,” along with storage rooms. It was approved by a judge on August 5, three days before it was to take place on Monday, August 8.

The raid was the first time a former president’s property had been searched as part of a criminal investigation.

Why and When Do I Need IT Consulting