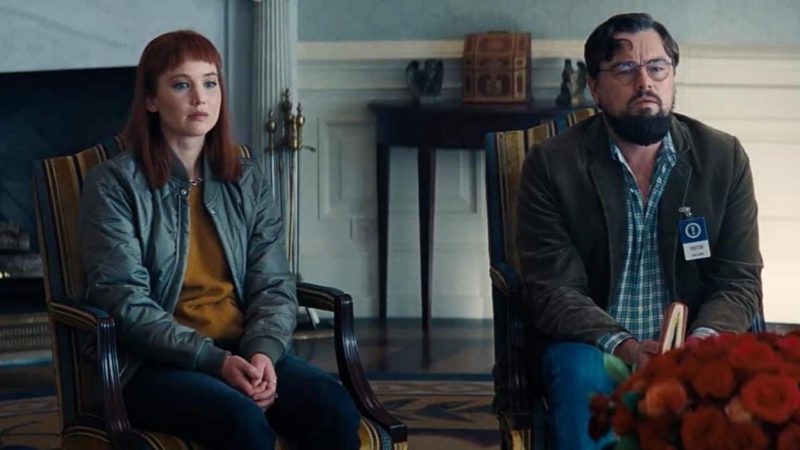 Fans its time to get ready for the most star-studded cast of the year. The streaming giant Netflix is no more stranger to various prestigious films especially after the success of The Trial of The Chicago 7, but the new release Don’t Look Up might be I guess the starriest one fans would have ever seen.

The Oscar-winning director Adam McKay is all set to bring us the amazing Don’t Look Up movie which is based on a satirical comedy that takes a classic disaster movie premise towards the Earth. Now it’s up to the characters Leonardo Dicaprio and Jennifer Lawrence to further go on a press tour of all the things in order to warn the public. While they are doing this they will encounter a who’s who of the most acclaimed actors including Cate Blanchett, Jonah Hill, Timothee, and Meryl Streep.

Getting curious enough? in this article, we have collected all the information about the star-studded movie by Adam McKay.

Release date Of Don’t Look Up

The release date for Don’t Look Up in UK cinemas is on December 10.2021. The film will then receive its streaming rights for Netflix worldwide on December 24, 2021. So this gives us a nice Christmas watch at home for the family especially if satire and apocalyptic comedy are your family thing. The star-studded comedy series also continues the amazing trend of releasing some film content in the cinemas prior to the wider streaming service release.

The cast of Don’t Look Up film will be led by two amazing characters Leonardo DiCaprio and Jennifer Lawrence. Both the actors are returning to a film especially in a lead role after quite a several years. Lawrence will be seen playing the role of heroic astronomy grad student that is Kate Dibiasky while DiCaprio plays the role of her professor, Dr. Randall Mindy.

That’s not all the cast will also include the legendary actresses Meryl Streep Cate Blanchett in the film as well as singers Ariana Grande and Scott Mescudi aka Kid Cudi.

Anchorman star Adam Mckay who has written and produced the movie also recently teased that Chris Evans has a little cameo in the series. He said:

“Honestly, I’m still in complete shock that we got all these megastars to agree to do this in the first place. We initially sent the script around in early 2020. Jen Lawrence was the first one we went out to and was the first to sign on. Then Leo agreed, then Jonah, and Meryl. At a certain point my casting director said it was getting ridiculous. It occurred to me that we had one of these movies they used to make in the ’60s and ’70s that had 25 different stars in it, like It’s a Mad, Mad, Mad World or A Bridge Too Far. It started to feel like it was becoming one of those kinds of adventures. 2020 was going to be amazing!”

In short, we can say that the cast is pretty impressive and there is likely so small part in the film due to ti the success of the director who’s previous films have been universally acclaimed and have received nominations in the Oscar.

The film Don’t Look Up is a disaster film and unlike any other film, it follows the astronomy grad student Kate Dibiasky and her professor Dr. Randall Mindy. Both of them together have discovered a comet on a direct collision course with Earth.

Now naturally they take this news to the president and her fawning chief of Staff. To their surprise, they have heard enough of stories associated with the apocalypse and are indifferent on the matter. now, with the help of Dr. Oglethorpe, Randall and Kate will go on a press tour to save humanity. This very situation puts them into all sorts of eccentric media personalities from the ones who host morning shows and more. Now as there are only six months left to the apocalypse, it is now no longer funny of how unwilling people are to pay attention. So what will be the things that will bring the attention of the people to look up to this situation?

In crisp words, we can say Mckay’s Don’t Look Up is a black comedy movie at hearing that will be taking an aim at the 24-hour news cycle and social media in particular.

The full theatrical trailer for Don’t Look Up has already been released on November 16th, 2021. The trailer teases us the story of Kate and Randall doing all of the things they can to convince the politicians and media people about the upcoming apocalypse and want everyone to take it seriously. you can watch the trailer below:

Read Also  No One Gets Out Alive Release Date, Cast, Trailer, and Other Details

Another trailer was released because the earlier one was a bit shorter and it became the teaser but was no less impactful than the actual official trailer.

Thoughts of Leonardo DiCaprio on Don’t Look Up

Leonardo DiCaprio shared his thoughts about the film about how the film has a new environment tone and the director Adam Mckay’s brilliance behind the film. He is glad to be a part of this film especially the ones which come from the 60’s and 70’s storylines.

His official interview statement reads: “I’ve often in my career looking for a film that had an environmental undertone to it and what Adam McKay did was so brilliant, using the analogy of a giant comet heading towards Earth and showing how the human race would react to it from a political and scientific level, which I’d never seen before. It was a once-in-a-lifetime opportunity in a lot of ways. I’m a huge fan of a lot of these films that came from the ’60s and ’70s — Parallax View, Three Days of the Condor, certainly Network and, of course, Dr. Strangelove, which talked about the Cold War through dark comedy.”

This was all which we knew about the film Don’t Look up. The film will be released in the UK cinemas on 10th December 2021. Are you guys going to watch it? or else you can wait for its Netflix worldwide release that will be on 24th December 2021. Share your reviews on the same in the comments section.