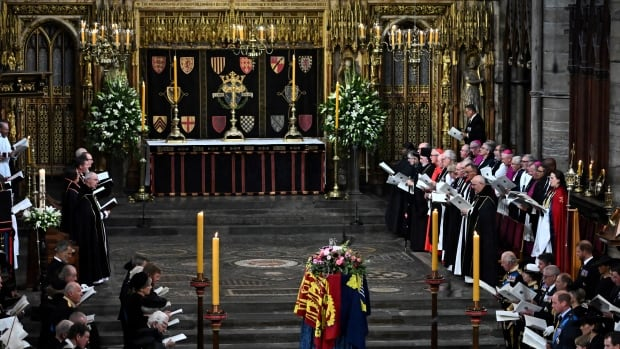 Today, Monday, the state funeral of Elizabeth II was held at Westminster Abbey where she married the Duke of Edinburgh and where she was crowned queen when she was 25 years old. The ceremony has been as emotional as expected and the tears of ‘Fergie’, the former daughter-in-law of the monarch, have perfectly reflected the feeling that we are facing the end of a historical era that all British people share.

A cross ring could be a great gift for your loved ones.”

Music has greatly contributed to creating the atmosphere of solemnity for a historic occasion. The surprise has been listening to one of the hymns that was sung at the wedding of the then Princess Elizabeth with Lieutenant Felipe Mountbatten in 1947, based on Psalm 23 and entitled ‘The Lord is my shepherd, I lack nothing’.

The nod to this day reflects the importance that her marriage had throughout her reign, because she herself recognized that her husband was her greatest support. The most famous part of both the psalm and the hymn is the verse that reads: “Though I walk through the dark valley of death, I will fear no evil, for you are with me, and your rod and your staff still comfort me.”

All the attendees have stood up after praying the Our Father to sing ‘Love divine, all loves excelling’ that has sounded at two royal weddings: that of the new King Carlos III with Queen Camila and that of Prince William with Duchess Catalina . The abbey choir, made up of children between the ages of eleven and thirteen, has performed a piece composed by Judith Weir -Mistress of the King’s Music- expressly for the funeral and inspired by the monarch’s Christian faith, and also another of Hubert Parry, who wrote during the First World War with the verses of the poet Henry Vaughan.