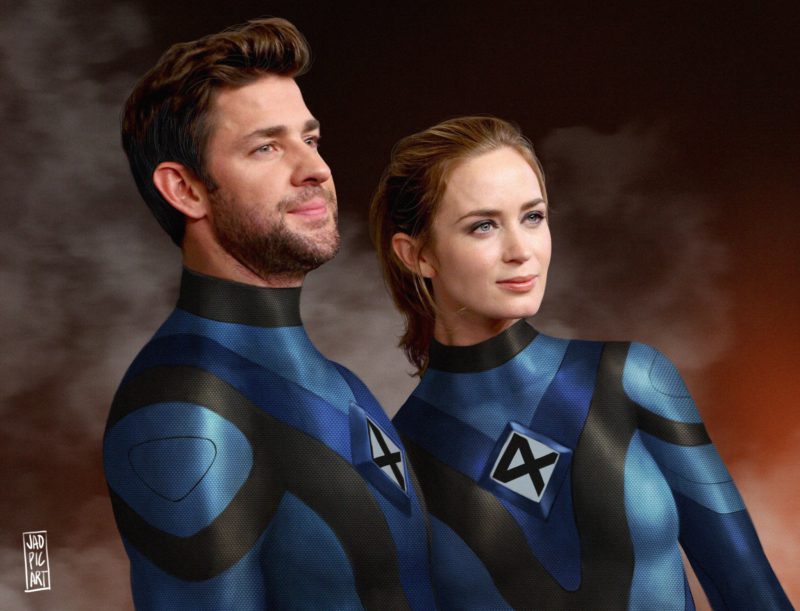 The creators of the MCU are reported to be interested in having the actress and her husband, John Krasinski, be a part of the new film.

Recently, rumors have begun to circulate that Marvel is interested in the husbands Emily Blunt and John Krasinski being part of the new “Fantastic 4” movie, although, at the moment, nothing has been confirmed.

Also, it had been announced that the role of Susan Storm had already been offered for the actress, although it was speculated that she turned it down. Now, the Geekosity portal has reported that Marvel is doing everything possible to make the actress change her mind.

Not only is she the most popular choice to play Susan Richards, but she’s perfect for the role. She is a really good actress who would add seriousness to the role. Adding her real-life husband would be the icing on the cake, ”reported a source close to the production.

This is not the first time that the creators of the MCU look for the actress, as the protagonist of “A Silent Place” was the first choice to play the role of Black Widow, but the actress rejected it due to scheduling problems so that the role was awarded to Scarlett Johansson.

ALSO READ: Emily In Paris Season 2: What Makers Need To Avoid In The Second Season

For his part, her husband, John Krasinski has been more enthusiastic about being part of the superhero family, something he emphasized in an interview last 2020:

“I would love to be part of the Marvel universe. I love those movies because they are so funny, but I also think they are very well done. And certainly, a lot of my friends are in those movies. If you are considering me for Mr. Fantastic, please continue to do so, because I would love to, ”said the actor.

When is the movie released?

There are no confirmed dates for the start of filming for “Fantastic Four,” but with the recent success of Wanda Vision and Falcon and the Winter Soldier on Disney +, fans are hoping it will arrive sometime in 2023.

It has also been reported that the new film will be directed by Jon Watts. Who worked on the Spider-Man saga: Homecoming, Far From Home and the next to be released, No Way Home.

Is Joaquin Phoenix Returning For Joker 2?