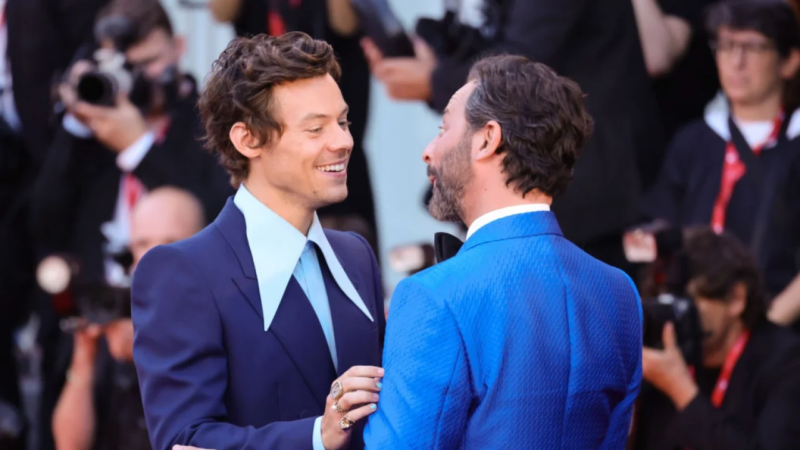 Harry Styles was inches from his girlfriend, director Olivia Wilde, during the screening of ‘Don’t Worry Darling’ at the Venice Film Festival, but it was his co-star, Nick Kroll, who he decided to plant a kiss to celebrate the great ribbon welcome.

The interpreter of ‘Watermelon Sugar’ attended the press conference and the premiere of the next psychological thriller, during one of the most anticipated film meetings of the year, where, along with his co-stars, Florence Pugh, Gemma Chan and Chris Pine, received a standing ovation. To celebrate, Harry appeared on the moon, went straight to Nick, cupped his face in his hands and planted a kiss on his lips. The actors, who seemed very happy, also shared a hug while the attendees cheered them on.

Previously, the British artist reflected on the film and his acting career by taking on his second role after participating in Christopher Nolan’s ‘Dunkirk’.

“It’s fun to act in worlds that aren’t necessarily your own,” he said during the press conference. “This world [de ‘Don’t Worry Darling’] it is supposedly so perfect; it was fun to play pretend on it. It’s like driving funny cars, a lot of fun things too. We were lucky to have such a well-built world around us, to be able to play in reality instead of pretending that everything was beautiful.”

‘Don’t Worry Darling’ has been in the midst of controversy, especially after rumors of an enmity between Florence and Olivia (although the director has had nothing but praise for her lead actress).

While Harry, Chris, Gemma and Olivia attended the press conference, Florence had to fulfill filming commitments for ‘Dune’. However, she did show up to the premiere and posed with her co-stars and the director.

Kristen Zang Slams Criticism About Her Ex Leonardo DiCaprio, But Admits They Broke Up When She Turned 25

Handling Critics Without Censoring Your Creativity