Harry Styles Is Now A ‘Cop’, Deets Inside 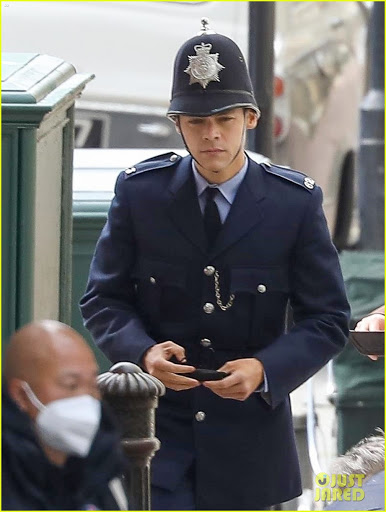 Fans of Harry Styles are going crazy right now because the “One Direction” star was seen in police uniform! We’ll tell you what it’s all about.

Harry Styles as a policeman in the new film

Whatever Harry Styles does – he creates a lot of hype with it. Now the “One Direction” star has been spotted in police uniform and fans agree that he would make a pretty cool cop! Incidentally, he will also be in his upcoming film “My Policeman”. Harry Styles is currently filming in Brighton, England, wearing a vintage uniform from the 1950s. Harry will play the cop and lead actor Tom Burgess, who falls in love with Patrick (David Dawson)- at a time when homosexuality was still illegal. His wife Marion is played by Netflix star Emma Corrin. We are very sure that the film will be extremely emotional! “My Policeman” is now a new movie with “One Direction”.

Harry Styles: successful as an actor and singer.

It’s definitely going right at Harry Styles. With “My Policeman” and “Don’t Worry Darling” he landed two great film roles. It wasn’t until March that Harry Styles achieved what no other “One Direction” member had done before and grabbed a Grammy Award! Both musically and as an actor, Harry is currently in the fast lane. By the way, he’s also courteous. Movie wife Emma Corrin said in an interview with Jimmy Fallon that the singer took care of her dog when she went out to dinner with friends, but only once. “He never did it again. I think that’s because I got this message in the middle of the evening: ‘He doesn’t stop farting, Honestly, good Harry! Kissing photos of the two of them during filming are circulating on the Internet, which makes fans really jealous – understandably!

The Kissing Booth 3: Will Lee And Elle Stay Friends In The Third Installment

Demon Slayer Season 2: When Will It Release?