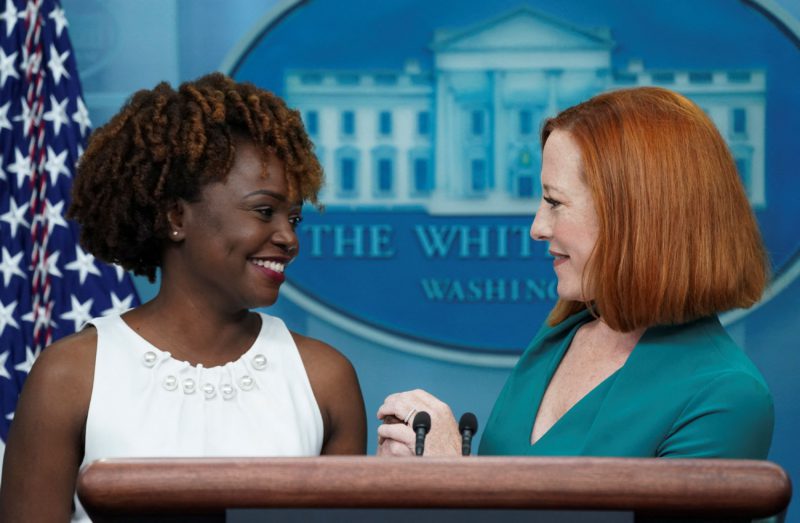 Karine Jean-Pierre on Thursday became the first black person and the first openly gay woman to be named White House spokesperson, a position that will make her the face and voice defending the policies of US President Joe Biden.

Her appointment is a reflection of the diversity of the U.S. government, where the Vice Presidency is named after Kamala Harris, who broke her own glass ceiling by becoming the first African American and the first American of Indian or Asian descent to assume that position.

Jean-Pierre, 44, will replace the current spokeswoman, Jen Psaki, who is scheduled to leave the White House on May 13.

Born on the French Caribbean island of Martinique and the daughter of Haitian immigrants, Jean-Pierre has served as Psaki’s “number two” since Biden took office as president in January 2021 and, on several occasions, has taken it upon herself to answer questions from reporters at daily press conferences.

She first stood on the podium in May last year, and then she made history as the first black woman in three decades to preside over hectic White House press conferences.

“It’s really an honor to be here today. I give importance to this historic moment, I really do,” began Jean-Pierre, who argued that, despite appreciating the historical significance of his speech in the press room of the presidential mansion, it should be downplayed.

Before her, only one other African-American woman had been able to stand behind the White House press lectern: Judy Smith, deputy press secretary to then-Republican President George H.W. Bush (1989-1993) and who inspired the character of Olivia Pope in the political television series “Scandal.”

AN “EXTRAORDINARY” WOMAN WITH A GREAT SENSE OF HUMOR

Jean-Pierre had long sounded like a possible replacement for Psaki, who had already made clear his intention to leave office about a year after taking office.

In a message on Twitter, Psaki described her partner as an “extraordinary woman,” “passionate” and “intelligent” with strong moral principles and a huge sense of humor, which makes her not only a great professional but also a great mother (she has a daughter) and a great person.

“I can’t wait to see her shine as she brings her own style, radiance, and grace to the podium,” Psaki said.

In a statement, Biden also praised Jean-Pierre, who was his adviser when he served as vice president in the Obama administration (2009-2017).

The president called Jean-Pierre by his first name, Karine, and considered that he has the “experience”, the “talent” and the “integrity” that is needed for such a difficult job.

Jean-Pierre has experience in the public and private sectors and has participated in numerous presidential campaigns, including those of Obama in 2008 and 2012, as well as Biden’s in 2020.

DEFENDED KAMALA HARRIS FROM A PROTESTER

However, before coming to the Biden campaign, he worked in 2019 for the progressive platform MoveOn, which then sought to remove then-President Donald Trump (2017-2021) from the White House.

A well-known anecdote from the time is that Jean-Pierre, as Director of Public Affairs at MoveOn, organized a debate to which she invited Harris and in which she ended up confronting a protester.

Specifically, unexpectedly, an animal rights activist took the stage and pounced on Harris to remove the microphone, before which Jean-Pierre intervened by putting his body between the then-senator and the protester, much taller than her.

“It was a moment when I was scared, but the only thing I could think of was that I had to act,” Jean-Pierre later reflected in an interview on MSNBC.

Jean-Pierre, at the time, thought that perhaps the man who had taken the stage was a white supremacist who wanted to hurt Harris, then the only African-American woman competing in the Democratic primary for president, a race Biden won.

“And I said to myself, no, this is not going to happen today,” Jean-Pierre said, recalling what happened.

The new spokeswoman has also worked as a political analyst for NBC and MSNBC, and as an advocate for women’s reproductive rights for the American Civil Liberties Union.

Jean-Pierre will take office at a time when abortion rights are in jeopardy in the U.S. and just as Biden faces an invasion not seen in decades, while at the same time trying to deal with russia’s invasion of Ukraine.