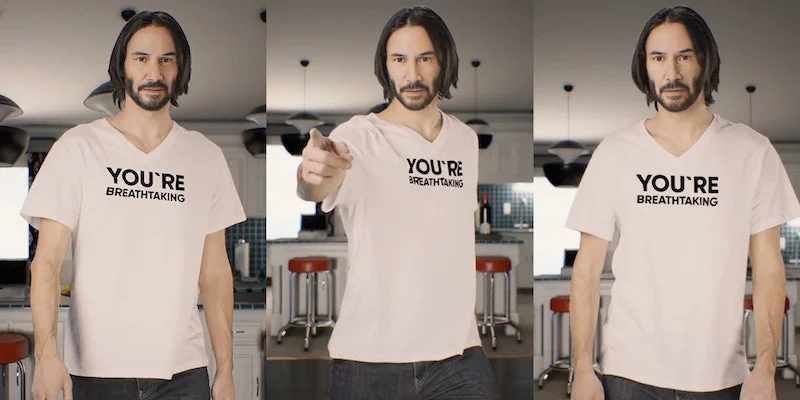 Is Keanu Reeves the next celebrity to have a deepfake video surface on TikTok? Is it real or fake?

TikTok has emerged as a powerful platform for imitators of famous people, especially celebrities. Take, for instance, the look-alikes of Scarlett Johansson and Margot Robbie. They became overnight internet sensations due to the striking similarity they had to the respective Marvel actresses, which gave the impression that they were more real than they really were.

There is, however, one thing with Tik Tok that you may not be aware of. Certain people are using deepfake softwares to impersonate renowned celebrities such as Robert De Niro and Al Pacino, and these individuals are collecting millions upon millions of followers daily. And Keanu Reeves as well couldn’t escape them.

What Exactly Is Deepfake Software?

Before we move on to discussing the deepfakes of Mr. Reeves on Tiktok, let’s quickly take a look at what deepfakes are!

Deepfake software refers to programs that can adequately superimpose a picture of one person’s face onto the body of another person. Some of these deepfake programs are so convincing that they are rather unsettling.

Keanu Reeves Does not have a Tiktok Account, but his deepfake has caused high confusion among everyone.

Celebrities have taken over social media, but Keanu Reeves isn’t one of them since he doesn’t use TikTok. Nevertheless, his deepfake or his look-alike on TikTok, who posts videos under the name “unreal_keanu,” is undeniably become hugely popular among the fans.

The world of social media is a peculiar place where you might meet individuals and come across things you won’t believe unless you have concrete evidence of them. So many people were left in utter confusion when they came across a person who resembled Keanu in many ways.

People were sure that it was the actor himself, leading to a great deal of confusion among Keanu Reeves’ fans.

Is Real Keanu Reeves on TikTok?

Keanu is not active on any of the social media sites, which is really disappointing, given how much we would enjoy following him there. Therefore, if you believe that you have seen his profile on TikTok, you should question that assumption.

The actor has been quite public about his intention to avoid social media and has maintained his isolation from these platforms. In fact, he revealed further information about the reasons he avoids participating in such platforms during an interview with Entertainment Tonight.

Keanu’s deepfake, who has the username “unreal_keanu” on TikTok, has taken control of the platform. At this point, he has 6.5 million followers across all of his social media accounts. In his biography, it says, “Parody, Life, and Eternal Youth.”

As of now, he has not disclosed any personal details, including his real identity or any others. As a result, a good number of people are under the impression that the person operating the camera may have used computer-generated imagery (CGI) to make himself seem to be the actor.

On the other hand, there are those people who have hypotheses that suggest that it may be Keanu himself.

In some of the videos, he does well-known dances, while in others, he imitates famous TikTok trends. Some viewers are under the impression that this is genuinely Keanu’s private burner account, which he uses to vent his frustrations and let off some steam. This is despite the fact that Keanu’s earlier videos have a more stilted appearance than his recent ones.

Read Also  The Blacklist Season 9: NBC confirms date of the final episode of the crime drama

There is also a Taylor Swift Deepfake. The person known as @traumarn13 was eager to throw people off by applying cosmetics and outfits that gave the impression that it was Taylor herself. Many people were fooled by this. Since the artist has joined the social media site, it is now much more straightforward for fans to figure out who is the genuine version of the performer.

How Are Keanu Reeves Fans Reacting To This Deepfake?

Despite the fact that the account is titled @unreal Keanu, it seems to have duped a large number of TikTokers into thinking that the TikToker is either Keanu Reeves himself or an eerie doppelganger of him. The fact that its content is generated by AI and is explicitly mentioned in the videos has also not tipped off the fans.

When one of the account’s 41 viral videos is investigated, one may find hundreds of comments of this kind. There is a video that has received over 115,8 million views and is rife with comments praising the well-known actor Keanu Reeves. In the video, Reeves can be seen dancing in a digitally generated version of himself.

One user congratulated the individual on their accomplishment and noted that they were the first person they had purposefully followed on the site, adding that they should “keep it genuine and remain safe.”

Read Also  'House of the Dragon', Ready To Correct The Most Controversial Aspect Of 'Game of Thrones'

In a more recent video that has more than 35,500,000 views, several individuals acknowledge that they do not really know for sure if the video is real or not.

“POV: you’re checking the comments to figure out if it’s a look-alike guy or some kind of face swap filter,” one user said.

However, not everyone has fallen for the trick. In the most recent video uploaded to the account on Thursday, which has already received 13 million views, many of the commentators are making it a point to bring it out to others that the person depicted is not Reeves.

“Hope you guys are aware that this is not real???… It’s CGI!!” one user commented. Some stated that they had only just learned that the videos had been altered.

It would seem that Reeves is the latest victim of a deepfake video, which has taken over TikTok. As people become more and more aware of this technology, it will be interesting to see how they react to videos like this- especially when they involve celebrities or other public figures.

So far, Reeves’ fans have been mostly confused by the fake video; some are even convinced that it’s really him! We can only wait and see what happens next in the world of deepfakes. Have you seen any other interesting examples of deepfake videos? Let us know in the comments below. Thanks for Reading!