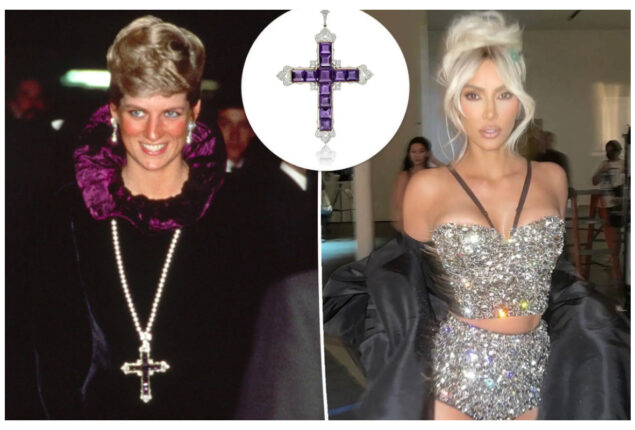 Kim Kardashian has come under intense criticism once again after purchasing a necklace belonging to the late Princess Diana at an auction held by Sotheby’s. On Wednesday, January 18, Kardashian acquired the Attallah cross, comprising of amethysts and diamonds. This jewel had been worn solely by Princess Diana at a London charity gala in 1987, and had not been seen in public since her death in 1997.

Sources from the magazine People reported that Kardashian was “honored” to own such an iconic piece and that the cost of the necklace was more than double its estimated value; 197,453 dollars (around 182,450 euros).

Critics have argued that such an iconic jewel should have gone to one of Diana’s granddaughters, or been in a museum. The acquisition has been made mere months after Kardashian wore Marilyn Monroe’s dress to the Met Gala in May, 2022 – an outfit which was met with much criticism. Defending her wearing of the vintage dress at the time, Kardashian declared she had been “extremely respectful”.

This isn’t Kardashian’s first piece belonging to an emblematic woman, as she previously acquired Jackie Kennedy’s Cartier watch in 2017, one of Michael Jackson’s jackets in 2019, and Janet Jackson’s “If” clip in 2021.

The acquisition has sparked increasingly humorous reactions from observers, joking that Kardashian will soon be purchasing the shirt President JFK was assassinated in or the dress Jesus died in.

Why Canadians Should Only Play at Fully-Licensed Online Casinos