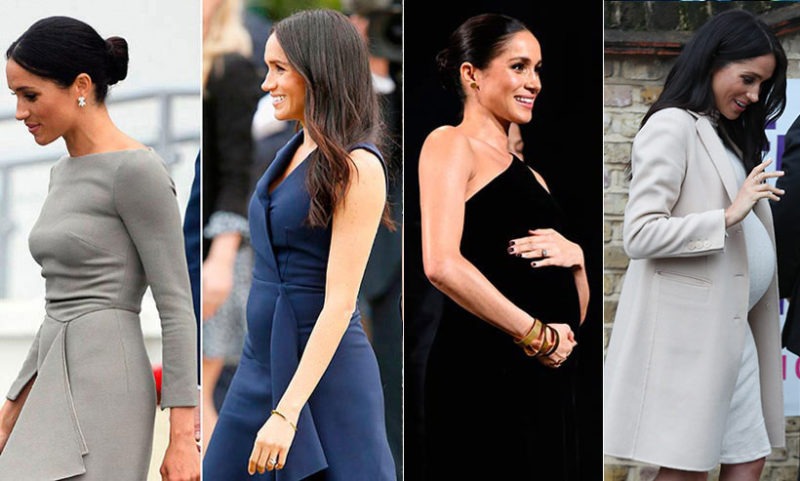 New photos of Meghan Markle show what she looks like with her second pregnant belly. The 39-year-old Duchess of Sussex was pictured by the paparazzi holding her first child, Archie Harrison, 1. The child, the product of Meghan’s marriage to Prince Harry, 36, was leaning on his mother’s growing belly. on the way to his initial school in California, according to reports.

The photos were taken on Wednesday, the day after the Duke of Sussex returned to California, after traveling only to be present at Prince Philip’s funeral in the UK. Meghan looked relaxed in blue jeans, a black shirt, military green jacket, flat shoes nude pointy toe and a black face mask to prevent contagion of COVID-19.

While with his left arm he held his first-born son, with the other he carried the child’s space-themed lunch box. Archie looked fashionable in rolled-up jeans, white velcro sneakers, a gray jumpsuit over a light blue shirt to match the socks, a black beanie, and a green backpack. Mother and children were smiling and Meghan looked tender with her bulging belly.

Also Read: Prince Harry and Meghan Markle on their way to their first Netflix series: what will it be about?

It is said that the Duchess would be around seven months pregnant. Meghan and Harry will become parents to a little girl in the summer. If the calculations do not fail and it is true that she is in her seventh month of gestation, the eighth heir to the British throne could be born between June, or at the latest in the first weeks of July. The couple revealed the baby’s gender during their explosive interview with Oprah Winfrey in early March.

That was the first time Meghan was seen with her pregnant belly, after announcing that she and Harry were expecting their second child on Valentine’s Day. Before this big news, the Duke and Duchess of Sussex had a tough time as a family. Well, in July 2020, Meghan suffered a miscarriage that led to her being admitted to a medical center in Los Angeles.