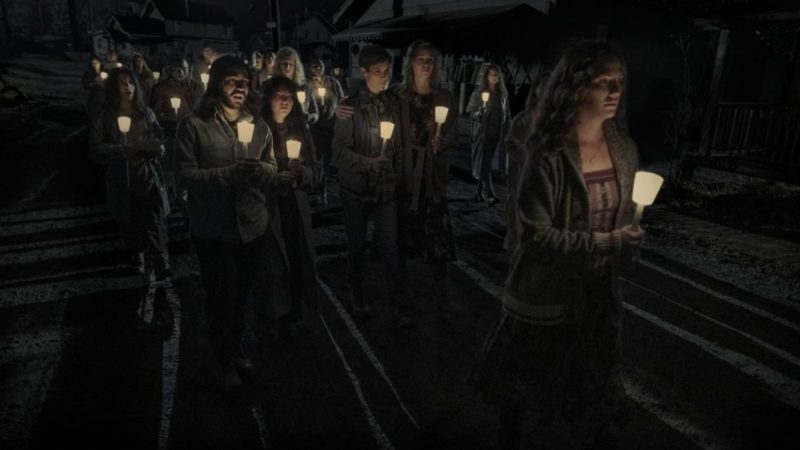 Midnight Mass: In recent times, the horror genre has been dominating the originals at Netflix. Especially after the arrival of the Army of the Dead and Fear Street trilogy, the future for upcoming horror productions seems excellent enough.

Here’s good news for the fans, The Haunting of Hill House writer-director Mike Flanagan is returning to Netflix with another horror title Midnight Mass.

The show will most likely be connected to the Haunting series. The show is reportedly set in the same universe and is one of Flanagan’s most scary works.

Here’s everything you need to know about one of the most anticipated Netflix horror projects of the year.

Midnight Mass: What Is The Netflix Show?

As presented in Netflix’s official press release, Midnight Mass revolves around a small island community, a disgraced young man, and a priest. Since the arrival of the priest, Crockett Island witnesses miraculous events, but these come with a price to pay.

Midnight Mass tells the tale of a minor, isolated island community whose existing divisions are amplified by the return of a disgraced young man (Zach Gilford) and the arrival of a charismatic priest (Hamish Linklater). When Father Paul’s appearance on Crockett Island coincides with unexplained and seemingly miraculous events, a renewed religious fervor takes hold of the community: but do these miracles come at a price?

Previously Flanagan has labeled Midnight Mass as his favorite project to date; in a letter shared on Twitter, he states,

“As a former altar boy, about to celebrate 3 years of sobriety, it’s not hard to see what makes this so personal. The ideas at the root of this show scare me to my core.”

He added, “There is darkness air work on Crockett Island. Some of it is supernatural, but the scariest is born of human nature. The darkness that animates this story isn’t hard to see in our own world, unfortunately.”

Moving ahead, he wrote, “But this show is about something else as well.. faith itself. One of the great mysteries of human nature. How even in the darkness, in the worst of it, in the absence of light — and hope — we sing.”

This one is special. Cannot wait for you to see it. pic.twitter.com/z7elBvERSb

Flanagan concluded his letter with the phrase ‘I hope you enjoy our song,’ is he suggesting that Midnight Mass will be a kind of Musical-Horror series? We will see when the show releases on Netflix.

Midnight Mass: When Is The Show Releasing?

A total of seven episodes were ordered for the upcoming horror series ‘Midnight Mass.’ The production was scheduled to begin in March 2020 but was later paused due to the covid-19 pandemic and was later resumed in August.

Netflix has alloted a September 2021 release slot to the upcoming Flanagan horror series. The show will release all its seven episodes on September 24, 2021.

Apart from this, Netflix has many new titles coming to the streaming service this September,

Midnight Mass: Who’s In The Cast?

The upcoming Flanagan horror series has an impressive list of stars in the first season. Good Girls star Zach Gilford joins the show as a disgraced young man named Riley Flynn. He returns to Crockett Island at the same time as priest Father Paul, who Legion star Hamish Linklater will portray.

The show will also feature some of the stars of the Haunting series. In the upcoming Flanagan horror, Katie Segel, Rahul Kohli, Annabeth Gish, Henry Thomas, Samantha Sloyan, Alex Essoe, and Robert Longstreet will be seen.

Lehman and Thomas will take on the roles of Riley’s parents Annie and Ed Flynn, while Rigney will be playing his younger brother Warren. Kohli will be seen as Sheriff Hassan, while Abburi will play the role of his son Ali.

Gish will take over the character of doctor Sarah Gunning.

Midnight Mass: Is The Show Part Of The Haunting Universe?

Though it is possible that the two can be connected somehow, but as reported, Midnight Mass is an entirely original piece of the story, while the Haunting series was based on a classic horror novel of the same name.

The only thing that might land connections between these projects will be the return of similar cast members. But this also is Flanagan’s interesting filmography technique.

Midnight Mass: Is A Trailer Available?

On August 9, 2021, Netflix dropped the first glimpse of the show with a horrifying yet exciting trailer that was loved by the fans awaiting the show.

Whom shall I fear?

From the creator of The Haunting of Hill House, Midnight Mass arrives Sept 24. pic.twitter.com/z6bcsPMYdw

Traditionally, Midnight Mass is a tradition held on Christmas Eve, starting at midnight then continuing till Christmas Day. Moreover, black plenty are Satanist events. The Satanists take Catholic celebration and invert it mocking the Christian rituals and values.

As the trailer reveals, Midnight Mass will be a horror revolving around the good and the evil. A fight with the Satanists could turn out to be much more haunting than the haunting universe itself.

Midnight Mass is one of the most anticipated shows of 2021. As of now, it is reported that the show is a miniseries, but who knows what Netflix will do to the show if it breaks all the previous records of any horror genre project on Netflix. Previously, Flanagan took over the world of Netflix with his show The Haunting of Hill House, followed by The Haunting of Bly Manor. This new project seems quite promising and we wish to see it soon on Netflix.

Tips to Increase your chances of winning sports bet