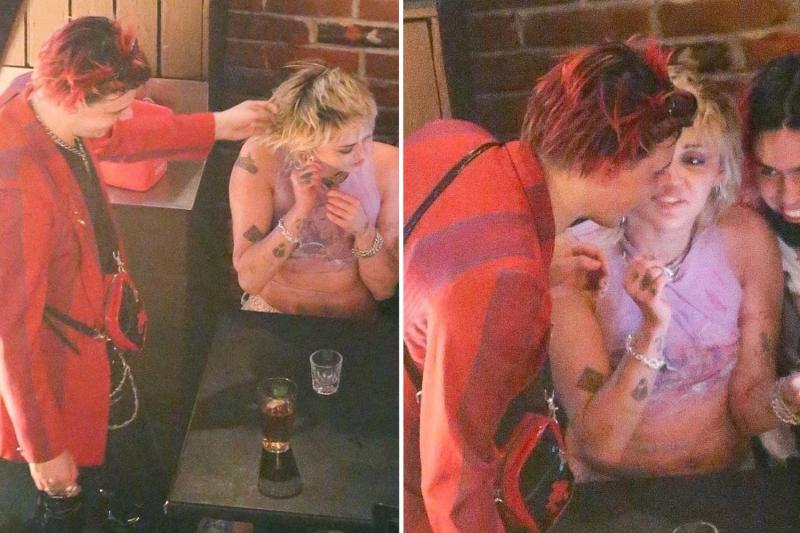 Miley Cyrus in party mode – and in crush mode! During a very lively evening with friends, the singer apparently flirted quite violently with the musician “YungBlud”.

The “Midnight Sky” singer was spotted visiting the legendary Rainbow Room in West Hollywood last week – after recently saying publicly that she was dry again. The snapshots, however, show her drinking at the bar and shamelessly flirting with the British singer, all dressed in red.

She nibbled his fingers

Miley and Yungblud, who previously dated singer Halsey, even seem to want to confirm the relationship rumors. He later put his legs over hers in a private corner of the bar, she bit him playfully and he even stuck his fingers in her mouth.

The 28-year-old looked confident and sexy in her rocker-chic look. The singer wore a crop top and ripped jeans, her blonde hair was wildly tousled and she completed the whole thing with seductive smokey eyes.

Giggling and fumbling in the corner

Yungblud – whose real name is Dominic Richard Harrison – goes quite well with the musician with his characteristic red curly hair, his two-tone jacket, and shiny black PVC trousers adorned with chains.

At some point during the evening, the 23-year-old pulled Miley aside for a “one-on-one” conversation and then went on a fumbling course with her. The two couldn’t keep their fingers off each other, they stroked each other’s hair, giggled, and touched before they even almost kissed.

Known for the song from “13 Reasons Why”

Yungblud left school at the age of 16 to go to London for his aspired music career. From 2017 he gradually became better known, because for the second season of the successful series “13 Reasons Why” he recorded the soundtrack song “Falling Skies” with Charlotte Lawrence. About himself says he’s a socially conscious artist who isn’t afraid of releasing cross-genre protest songs.

Stranger Things Season 4: Why Did The Byers Move Away?