Miraculous Ladybug Season 5: The Heroics of Ladybug and Cat Noir 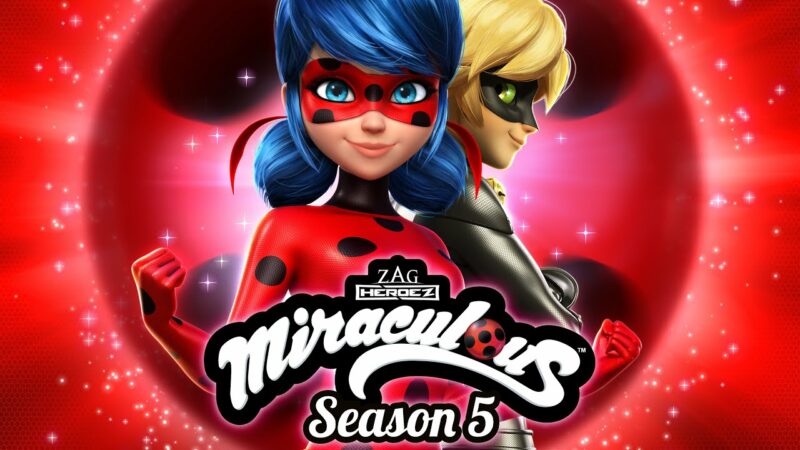 Of late, animation shows are quite the flavor of the season, and no mention of the animation genre would be complete without mentioning Miraculous: Tales of Ladybug and Cat Noir. Method Animation and Zagtoon launched this animated series for children in 2015, but in no time, it went on to impress everyone, from kids to grannies and grandpas. Today, the fans of this French computer-animated series comprise kids and adults alike.

Produced by Method Animation and Zagtoon and co-produced by Toei Animation, De Agostino S.p.A., and SMAG Animation, Miraculous airs in more than 150 countries.

So, what makes this series extraordinary? What is it that strikes the right chord with everyone? When and where can the fans watch the latest season of the show? Let us find out.

If you have not watched the trailer of this phenomenal series yet, here it is.

Here is everything you need to know about Miraculous Ladybug Season 5.

Up Close and Personal with Ladybug and Cat Noir

Miraculous: Tales of Ladybug and Cat Noir follows the story of two Parisian teenagers- Marinette Dupain-Cheng and Adrien Agreste. Both are regular teenagers unless they see something wrong. Blessed with the ability to transform into heroes – Ladybug and Cat Noir, through their Miraculous magic jewels, wreak havoc on villains.

Thomas Astruc created the series to cater young audience. Little did he know that his show will become one of the most popular animated series across the world.

The latest season of this series debuted in late 2022. And the movie is expected to release in 2023.

The finale episode of season 4 aired in March 2022, and since then commenced the string of wait, anticipation, and speculations about the next season. The mixed audience waited eagerly to see the cute little teenagers transforming into furious heroes and standing against evil.

Due to the last four seasons’ success and the anticipation of the audience, the makers renewed the series for the fifth season. Fans went crazy with excitement when season 5 was announced at CCXPWorlds, the entertainment and comic convention.

The Plot of Season 5

The first four seasons of this loved animated series track two teens, Marinette Dupain-Cheng and Adrien Agreste, crushing over each other (but not telling each other due to the fear of spoiling their friendship).

Their lives take a U-turn when Miraculous (magical jewels) entered their lives. Master Fu revealed the power of these jewels to the two teens. Different jewels possess different powers. Throughout the four seasons, the two teens were seen fighting the supervillains, transforming into superheroes with the help of the jewels.

By the end of the last season, we saw that Hawk Moth, the main antagonist, got most of the jewels, making him more powerful.

The latest season shows how Ladybug and Cat Noir salvage the stolen jewels and put up brave fights against the antagonist.

Furthermore, Ladybug will go around the globe to get Kwamis. Till now, 19 Kwamis are recognized and hundreds of thousands are waiting to be discovered. They might not come back to life, but she will manage to unearth a new Kwame and get her hands on some new skills.

The Voice of the Cast

In Season 5, Marinette Dupain-Cheng will take her voice from Cristina Vee in English and Anouck Hautbois in French. Bryce Papenbrook and Benjamin Bollen will become the voice of Cat Noir in English and French, respectively.

Mela Lee and Marie Nonnenmacher will lend their voices to Tikki in English and French, respectively. Plagg will get its voice from Max Mittelman (English) and Thierry Kazazian (French). Furthermore, Keith Silverstein will voice Shadow Moth in English, while Antoine Tome will voice him in French. Lastly, Master Wang Fu will get his voice from Paul St. Peter (English) and Gilbert Levy (French).

The Release of Miraculous Ladybug and Cat Noir

This season will have 27 episodes. Till now, 9 episodes of this season have been aired and received well by the audience.

Where to Watch The Ladybug?

Disney Channel airs the new episodes of this series every Saturday at 10 am in the United States of America. No doubt, the fans eagerly wait for Saturday to meet their favorite superheroes. The episodes also air on DisneyNow for re-runs.

It is also available to watch on Netflix and Google Play Movies & TV.

In 2018, Jeremy Zag talked about his plans to create a live-action movie based on Miraculous Ladybug at ComiKon Istanbul. His announcement took the Miraculous fans by storm. In October 2018, the makers announced that they will release the movie in 2021.

Read Also  Legacies Season 4: Episode 15 said goodbye to this character from The Originals

However, they changed the plan and stalled the movie until the release of season 5. The makers announced that it will be called “Ladybug & Cat Noir Awakening”, and it will be a romantic fantasy adventure. Later, Michael Gracey announced his collaboration with the project, which made the fans go gaga.

What we know now is that “Ladybug & Cat Noir: The Movie” (Miraculous: Le Film in French) will release on the 5th of July 2023 in France. However, the makers are yet to announce its release date in the US. It will be directed and produced by Jeremy Zag.

Apart from the movie, the fans are also waiting for season 6 and season 7 of the series. They will premiere between 2023 and 2024, as announced on the 18th of April 2021. As of now, the sixth season is in the writing and production stage. It will have 26 episodes. It will premiere in the third quarter of 2024.

Miraculous is one of the most popular animated TV shows of all time. It received 7.9 out of 10 stars on IMDB and 4.3 out of 5 stars on Google Play. Numbers say that 92 percent of Google users loved this series.

If you are also a fan of this wonderful animated superhero series, watch all the latest episodes of season 5 now. A re-run of the old seasons will also not hurt.

Ally and Tommy argue on FaceTime and it makes you react