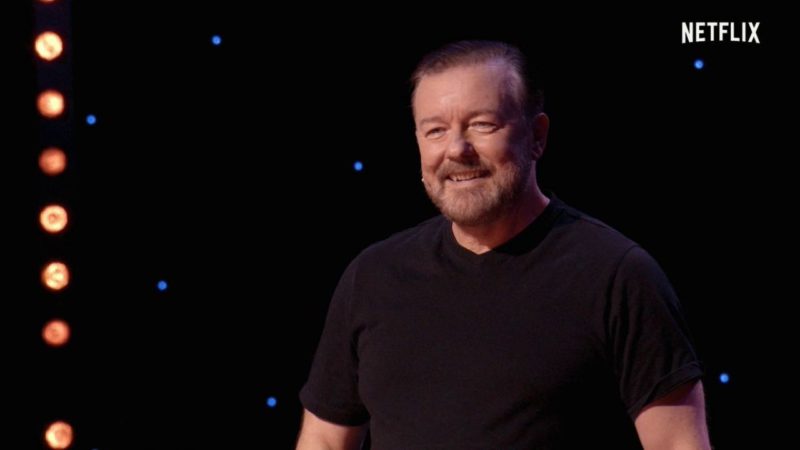 Way back in 2018, Ricky Gervais released Humanity on Netflix, his stand-up special in which he deconstructed the current state of humanity with his humor and, as you might expect with Gervais, he did so by offending all of humanity in the process. The special quickly became the most watched comedy segment of the year in question.

Gervais, who has an exclusive content deal with Netflix, has also found phenomenal success with his After Life series, which ended this year. After three seasons, the dramatic comedy that follows Tony (Gervais) trying to move on with his life after the death of his wife, reached its emotional end, and achieved on Netflix more than 85 million viewers worldwide, making it in the most successful British comedy of the decade.

Ricky Gervais on his hit series, After Life

With success assured for a platform in free fall, Netflix couldn’t wait to announce the premiere date of the acclaimed comedian’s new stand-up special, which was initially announced in 2019. After beginning his tour in late 2019 and during the pandemic in 2020 and 2021, Gervais filmed Supernature, an event that seems to live up to its previous outstanding content. Netflix even accompanied the release date announcement with a trailer:

Read Also  Between life and death: criticized but trending, who is right?

The streaming giant has set a May 24 premiere for Supernature, the second stand-up special that Emmy-winning comedian Ricky Gervais is preparing exclusively for the streamer. In Supernature, Gervais will give his opinion on the rules of comedy, will tell us how he spoils his cat and will take all kinds of value out of the supernatural, concluding that real nature is enough.

Humanity, the successful Stand-Up special that Gervais launched prior to the next Supernature

Gervais had done half of his Supernature tour before it was shut down by the pandemic in 2020, resuming 18 months later. In an interview earlier this year with Deadline, speaking about the tour, Gervais said: “I’m actually putting more into the show to keep it fresh and this spate of shows are the best I’ve ever done. I don’t know if it’s because I’ve been doing the same stand-up for longer than ever and I keep rewriting it and I keep folding the samurai sword. If you do the same concert 50 times, it’s better than doing it 10 times. Even if you don’t change the material, you do it better. But you change. It evolves to be better.”