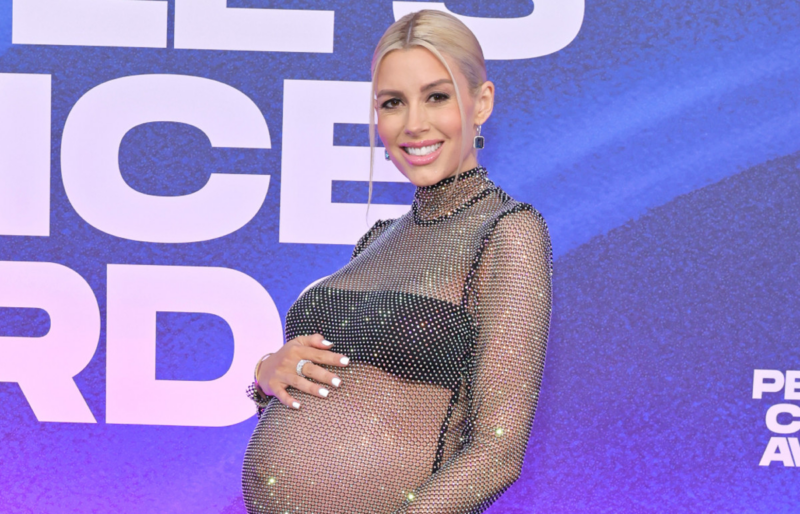 The days of pregnant women wearing conservative, flouncy dresses are long gone. Heather Rae El Moussa is the most recent expectant mother to rock maternity fashion her way. These days, a lot of pregnant women are proud of their bodies and still wear their pre-pregnancy clothes.

Heather Rae and Tarek El Moussa planned a stylish date night for the 2022 People’s Choice Awards! The expecting mother and her husband attended a ceremony on Tuesday at the Barker Hangar in Santa Monica, California, after Selling Sunset was nominated for The Reality Show of 2022 award. They both wore matching outfits.

The 35-year-old Heather flaunted her growing baby belly while wearing a black mesh see-through dress by David Koma. The black Femme LA opened-toe heels were highlighted by the high-rise split dress, which also complemented the black emphasis in her silver geometric drop earrings. She explained in an Instagram Story on Monday that she chose to wear her hair in a sleek bun so as to highlight the striking garment. Tarek, 41, wore a dark blue blazer that perfectly complemented his pregnant wife’s attire.

The couple announced in a video on their Instagram Stories that they would walk “our boy” down the red carpet before they left for the event.

Heather and Tarek made an announcement that they were expecting their first child together in July. I love being a step mommy, and I can’t wait to have my baby,” the 35-year-old reality television actress gushed. He’s coming shortly, and everyone is very happy. She has nested, said Tarek El Moussa, her 41-year-old husband. The real estate agent said, “I’ve been working like crazy.” We are prepared because the nursery is ready. But I have to take things a little more slowly. Early 2023 is when their baby boy is anticipated to arrive. Tarek is the father of two children, Brayden, 7, and Taylor, 12, whom he shares with his ex-wife Christina Hall.

Heather revealed to PEOPLE after learning of their pregnancy that She is excited to flaunt her evolving figure in maternity attire. She remarked, “Having to disguise it has just been extremely tough since I’m used to wearing tight, little stuff.” She continued, “I can’t wait to start wearing my tight dresses and gorgeous pregnancy clothes and show it off instead of hiding it.” “I’m so happy!”

The couple is expected to talk about their pregnancy experience in their upcoming HGTV docuseries, The Flipping El Moussas, which will broadcast in 2023.

According to HGTV, the couple’s lives will be featured as they encounter numerous important events. Follow the El Moussas as they relocate, undergo a major makeover, and deal with the complicated journey of becoming parents.

The Flash Release Date Has Been Moved Up

5 Best Services That Can Do MY C++ Homework