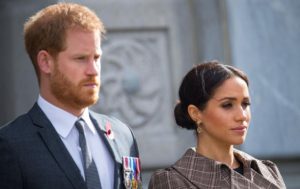 Day of the Elizabeth II. Arriving Wednesday in London with Archie (3 years old) and Lilibet (soon 1-year-old), for their first time in four in England, the Duke and Duchess took part in the celebrations, but in retreat. Since they are no longer active members of the Firm, Prince Harry and Meghan Markle no longer have access to the palace balcony for the traditional Trooping The Colour parade. So they left Prince Charles and Camilla, but also Prince William, Kate Middleton, and their three children greet the crowd.

However, as shown in photos relayed by the magazine “People” or “Page Six“, the Duke and Duchess of Sussex were each seen while they were near the windows, happily exchanging with some of the Queen’s great-grandchildren: Savannah and Isla Phillips (11 and 10 years old, peter Phillips’ daughters), Mia and Lena Tindall (8 and 3 years old, Zara Tindall’s daughters). The opportunity to discover the sophisticated look of Meghan Markle for this first day of celebration: the 40-year-old former actress was dressed in a navy blue boat collar dress, accessorized with a large white hat with blue ribbon signed Stephen Jones. For his part, stripped of his honorary military titles since he officially left the monarchy, Prince Harry was, not in a ceremonial uniform, but in a suit.

After this first stealth appearance of Meghan and Harry, will their children Archie and Lilibet also appear in the coming days? On Saturday, the day of “Lili’s” first birthday, the Sussexes are expected in Windsor for a private meeting with the Queen. Not only will Elizabeth II meet her great-granddaughter for the first time, but she will also see Archie again, whom she has not seen since she was 6 months old. More than two years after the Sussexes’ shock departure for California, tensions may finally be a thing of the past.

The Rolling Stones travel with their own gym and yoga room

How to form an offshore British Company