Princess Anne Just Made History During Vigil of Queen’s Coffin 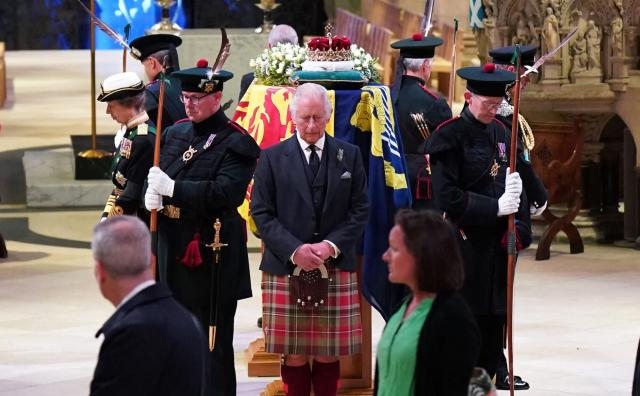 Queen Elizabeth’s four children have gathered at her coffin for a moving night vigil at Edinburgh’s St Giles Cathedral.

Following a brief procession, King Charles III, Anne, the Princess Royal, Prince Andrew and Prince Edward each stood in one of the four corners of the oak coffin with their heads bowed in a ceremony known as the Vigil of the Dead. princes.

The king and his family were with four suits members of the Royal Company of Archers, who stood guard dressed in long plumed hats and armed with arrows and quivers.

The public, which has passed by the casket by the thousands throughout the afternoon, was briefly held back to allow the royals to take their place. However, they continued to pass once the vigil began, offering them an extraordinary perspective of the historical moment.

Read Also  The bells are ringing: Jennifer Lopez and Ben Affleck are engaged for the second time

Several members of the public bowed as they passed the king, and others passed solemnly with bowed heads. Charles wore the Prince Charles Edward Stuart tartan and white heather on his Balmoral lappelle, while Anne and Edward appeared in military uniform.

However, Andrés – despite having served in the Falklands War – only wore a morning suit, as he has been banned from wearing a uniform on public occasions following his exile from public life amid the Jeffrey Epstein scandal. The Duke of York will only be able to appear in military dress during a second Princes’ Vigil at Westminster Hall.

The tradition has been going on since the death of King George V in 1936, and Princess Anne today became the first royal woman to take part.

The Queen and Countess of Wessex sat in seats facing the coffin as the vigil, which began at 7:46 p.m. and ended at 7:56 p.m., was held in the old cathedral. Archers have completed 20-minute periods guarding the coffin, which will remain at St Giles for 24 hours before being flown to London for repose.

8 Conversion Optimization Tips That Will Help You Get Results