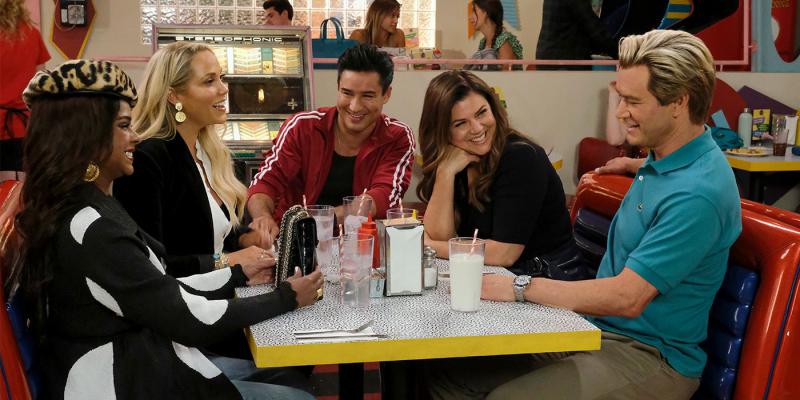 The Saved By The Ball renewal is on its way, and this time creator includes a new group of high-school students with the previous cast. Unfortunately, Dustin Diamond, who portrayed Screech in the comedy series, died in February 2021. The original cast is anticipated to pay homage to Diamond in season two, but the specifics have yet to be revealed. Dennis Haskins, who portrayed Principal Belding on the previous program, did not reprise his role in the revival because his character was expected to be retired at this time.

A new teaser of Saved By The Bell Season 2 has published by Peacock, and according to this, the show will premiere on November 24, 2021. With many highlights and plot teasers, the new season resumes the exploits of the new and old characters. This season, Bayside High will participate in the Southern California School Spirit Competition, while the different characters will face a range of challenges. Mac, Daisy, Lexi, Jamie, DeVante and Aisha will all face new difficulties (and, of course, new love), while Slater and Jessie, who have a turbulent romantic history, will get closer despite their stormy romantic past.

Zack Morris (currently Governor Morris) was seen in Season 1 shutting many poor high schools and moving kids to better-funded institutions like Bayside. This relocation brings in a more varied population than Bayside is used to, questioning their viewpoints and introducing a whole new character of people to their environment. Season one was popular enough to warrant a second, but no third season has been announced as of yet.

Both old fans and young fans like the comedy episodes of the Saved By The Bell and the contents of this already captured the interest of multiple generations.

Season 2 of Peacock’s Saved By The Bell: What to Expect

As per cbr.com, Daisy organizes a Bayside High student walkout in the Saved by the Bell Season 1 finale. She eventually persuades Governor Morris to impose a moratorium on new school openings and shutdown, allowing the Douglas children to remain in their current location. Meanwhile, A.C. apologizes to Jesse for voicing sexist remarks to her in high school, and Jamie kisses Lexi just as Ayesha is about to renew her relationship with him. The first season of Saved by the Bell concludes with Mac knowing about the Coronavirus, indicating that Bayside’s return to normality would be brief.

Wigfield’s approach to the plot for Saved by the Bell Season 2 is unknown. The program may include lockdown scenes, but it is more probable that the story will be set at Bayside High and will contain many allusions to COVID-19 culture. In any event, the second season of Saved by the Bell on Peacock will emphasize how much has altered since the first series ran from 1989 to 1993.

In addition to trying to see more of their characters’ personal (or romantic) interests, several people expressed a desire for additional homages to the original show. Belmont Cameli mentioned the “‘Rockumentary’ episode” as one storyline he would want to see recreated in the reboot, while Velazquez mentioned Lisa Turtle as one character she would like to see more of in season 2.

Mitchell Hoog wishes for more of Mac and Zack’s relationship; he said that he would observe people debating the potential of a Daisy and Mac romance. Darden, for one, was looking for not just a romance for his character but also a vacation to the beach.

Who is in the Saved by the Bell reboot’s season 2 cast?

The remake struck a balance between the legendary roots of the popular ’90s adolescent program with the comedy, fashion, and pop culture of a whole fresh (and young) generation. For this, the program blended old(er) and modern elements. The old crew’s kids and a few newbies from a nearby school closed down by the one and only Governor Zack Morris made up the series’ core characters and new category.

Read Also  Kim Kardashian's divorce is complicated: Kanye West made it quite difficult

While no casting announcements have been made, it is fair to assume that the main cast of Bayside High’s newest class, as well as old regulars Berkley and Lopez, will return. According to showrunner Tracey Wigfield, Thiessen, Voorhies and Gosselaar may make cameos, in addition to the potential of seeing Screech.