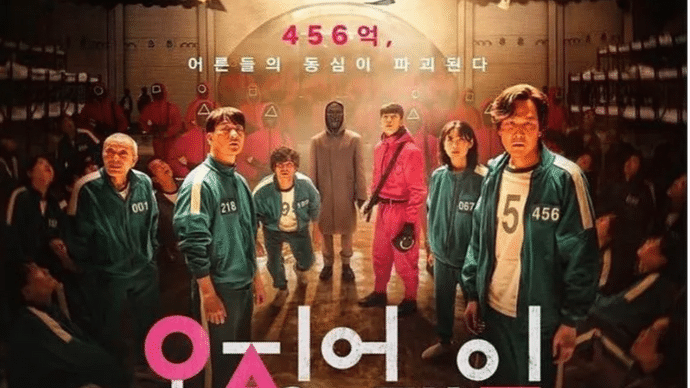 Squid game is a Korean thriller that is set to begin streaming on Netflix from September 17. The series is directed by Hwang Dong-Hyuk and stars like Lee Jung-Jae is one of the leading roles.

The “Squid Game” series follows a storyline where hundreds of debt-ridden people accept a very strange invitation to play s series of children’s games for a chance to win 45.6 billion won. However, the stakes are now raised immensely once the deadly truth behind the games comes to the light.

The trailer of the series begins with multiple shots of people being collectively abducted dressed inside a large room. They are then informed about the reason behind the concurrent predicament and the conditions they need to fulfil in order to win the prize money from the competition.

After that, the next scene shows a group of people who are going into open ground with a giant talking doll and at the other end explaining the game which is about to be played. The name of the game is a red light and green light. Once the game begins the people who move during the red light phase are shot down which causes a mass panic amongst the crowd and many more eliminations from the game as well.

Now the players are also shown playing other games such as tug of war and the titular Squid game as well. At the same time, some high profile observers in grand masks are also visible in the trailer. Many of the players will also be visibly seen protesting the dire situation they have been put in.

The wait is now finally over. Season 1 premieres on 17th September 2021 only on Netflix.

Here Is The Official Teaser of Squid Game Season 1

On the show you will get to see many amazing characters like Park Hae-soo as Sang-woo, Lee Jung-jae as Ki-hoon and Oh Young-soo as Il-nam. we will be seeing Wi Ha-joon as Joon-ho, Heo Sung-tae as gangster Deok-su and  Jung Ho-yeon as Sae-byeok. Other cast members would be Joo-ryung as a beautiful woman, Lee Ji-ha, and Lee Yoo-mi as Ji-Yeong and many more cast members will also be there in the show.

So now let’s wait for the release of the series and then share your reviews about the series in the comments section. We will also update you if there’s any new update regarding Squid Game.