The 10 Most Unexpected Moments at Awards Ceremonies 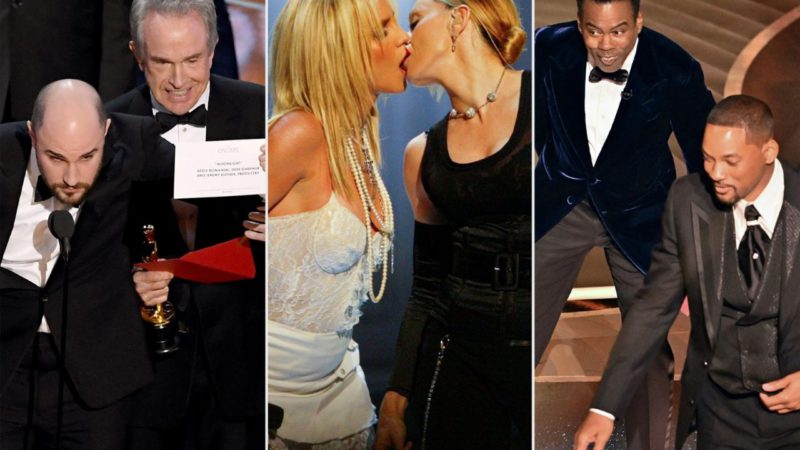 When a show is live, almost anything can happen. And no matter how much planning there is behind it to entertain us, usually the best moments on television are those without any planning. This past Sunday, during the last installment of the Oscars, Chris Rock and Will Smith verified just that.

While Rock was presenting the Oscar for Best Documentary Feature, the comedian joked about the shaved head of Jada Pinkett Smith, who suffers from alopecia: “Jada, I love you, GI Jane 2, I can’t wait to see it.” Jada’s husband, Will Smith, seems to have been offended by the comment (albeit with a slight delay), so he went onstage and slapped Chris Rock across the face, and verbally assaulted him. Things got even weirder about 20 minutes later, when Smith apologized to the Academy with a bizarre, tearful speech while accepting the Best Actor Oscar for King Richard.

This bizarre and genuine moment reminded us of another 10 of the craziest and most unexpected moments of celebrities during various award shows.

10: The kiss of Madonna, Brittney Spears and Christina Aguilera (2003 VMAs)

Two generations of pop divas come together in an iconic kiss. The scandalous cherry on top? The original broadcast of the moment showed a timely audience cut to Britney’s ex, Justin Timberlake, as he witnessed the moment.

We all love Taylor, and we have no doubt that she and Beyoncé were both worthy of this recognition, but when Kanye West decided to interrupt her VMAs acceptance speech, it was probably the best interruption of all time. And as difficult as it is, it may just be Kanye West’s most out of place moment.

Adrien Brody shocked everyone when he beat out Jack Nicholson, Daniel Day-Lewis and Michael Caine to become the youngest-ever Best Actor winner. However, the real surprise was when after going up to receive the award, he raised Halle Berry with a passionate kiss. It could only be all downhill from there.

7: Jodie Foster comes out in her speech (2013 Golden Globes)

The famously private actress behind The Silence of the Lambs gave a harsh speech about herself and Hollywood. While he came out thanking his “heroic co-mother and ex-partner,” Cydney Bernard, Foster also deconstructed what it means to come out and the idea of ​​privacy in an age where every celebrity has “a press right.” and the situation of the LGBT community in Hollywood at the time.

6. Roberto Benigni climbs the chairs of the nominees to get to the stage (Oscar 1999)

Yes, Roberto Benigni won two awards in one night for a foreign film. But what’s more impressive remains that Benigni is the only person in history to celebrate his first Oscar win by jumping over the back of Steven Spielberg’s chair to eventually reach the stage where he would receive the award.

The perfect microcosm of a selfie that defined an entire era in Hollywood history. Ellen literally made Twitter history with the number of retweets and likes the post received. Also, she proves that Bradley Cooper is very good at framing.

Gaga’s rise to fame became a risky fashion game, particularly as the rising diva found herself constantly outdoing herself with her wacky style. The highlight, however, was clearly the grotesque meat dress, which included raw meat.

It’s hard to find better unplanned joys of live TV than this. We expect the unexpected: accidental f-word bombings, political rallies, wardrobe malfunctions, and even stumbles, but when the Pulp Fiction star introduced the Frozen singer as “Adele Dazeem,” everything we thought possible came to an end. He was seen upside down in one of the most memorable moments on Twitter in history.

Speaking of stumbles, a perfectly spontaneous moment was when the rising young superstar was crowned the Academy Award for Best Actress for her work in Silver Linings Playbook, with a little hiccup that set her apart. The star fell on the steps of the Dolby Theater when going up to receive the Oscar. And as if she couldn’t get any better at this moment, Jennifer gets up from her, not even noticing that the two most recently crowned sexiest men of the year, Hugh Jackman and Bradley Cooper, were running for her to help her.

What other moment could top this list? To close out the 2017 Oscars, the stars of Bonnie & Clyde, Warren Beatty and Faye Dunaway, introduced the Best Picture category, where they called the favorite for the award, La La Land, the winner, when in fact Moonlight, the film that he was on his heels, he had won.

After Beatty opened the envelope, he paused briefly in shock, as Dunaway hurried over to read the winner: La La Land. The cast and producers of the film took the stage and gave their acceptance speeches. But as the celebration continued, commotion began to spread across the stage, and La La Land producer Jordan Horowitz returned to the microphone to announce, “There’s a mistake. Moonlight, you guys won Best Picture. This is not a joke”. He then held up the winning card that showed Moonlight as the true winner for all to see. Apparently, Beatty had been given the Best Actress envelope by mistake, which said Emma Stone, for La La Land.

Bridgerton: Know the true and tragic story behind the Netflix series