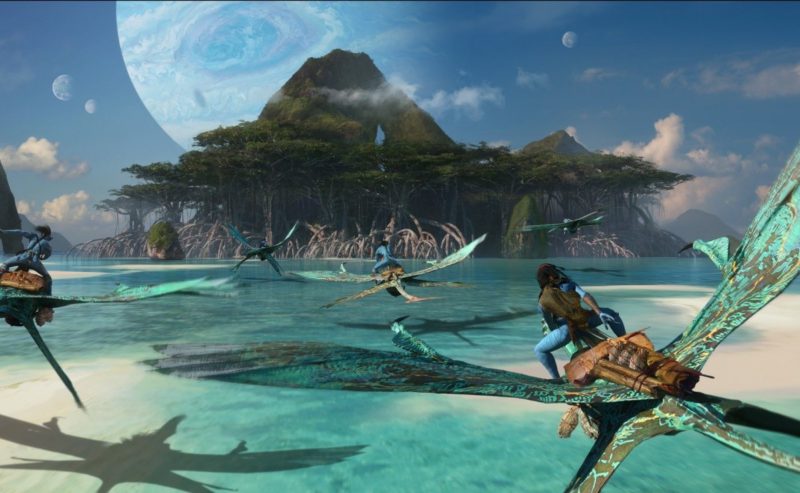 During the premiere of ‘Doctor Strange 2: Into the Multiverse of Madness’ it was expected that the first trailer for ‘Avatar: The Way of Water’ would be presented, however, Disney did not count on the cunning of the fans, who after the filtering of the first images of the film, now the trailer has arrived, and it looks simply beautiful.

During the CinemaCon 2022 celebration in Las Vegas, several trailers were presented from different companies such as Disney, DC Comics and of course, Marvel. Everything that was shown at the event, such as the trailer for ‘Black Panther: Wakanda Forever’, ‘John Wick 4’ or ‘Avatar: The Way of Water’ remained exclusive, but now the leaks have already begun.

It might interest you: Avatar: The Way of Water reveals epic first images

Thanks to the Twitter user @AWitorio16, he has leaked the first trailer presented for ‘Avatar: The Way of Water’, which although the quality of the video is not the best, since it is recorded with a cell phone directly from the movie screen, it gives a first look at the return of the planet Pandora, and promises to once again be one of the best special effects demos as its first part.

It might interest you: Release date, trailer and title of Avatar 2 revealed

In the leaked trailer for James Cameron’s sequel, you can see the new landscapes that the protagonists will visit in this new adventure, Sam Worthington as Jake Sully, and Zoe Saldaña as Neytiri, who have now had their first daughter, and who will be ten years after the first film.

The cast of James Cameron’s ‘Avatar: The Way of Water’

The rest of the cast includes Sigourney Weaver, Stephen Lang, and Kate Winslet reprising their roles from the first installment, now in the new aquatic world where the Na’vi live. With the first part of ‘Avatar’, James Cameron presented the highest grossing film of all time, only surpassed by ‘Avengers: Endgame’, which lost the throne during a revival a few months ago.

But James Cameron does not intend to let more than 10 years pass again for a new film in the action and science fiction franchise, because along with ‘Avatar: The Way of Water’, the director planned four more films that will be released in the consecutive years, one every two years, ending in 2028.

James Cameron’s sequel looks to be once again one of the most important film events of the year, or perhaps of the decade, as was the premiere of the first ‘Avatar’, and has promised that beyond the special effects designed specifically for this film, the franchise will revolutionize “the limits of cinema”.