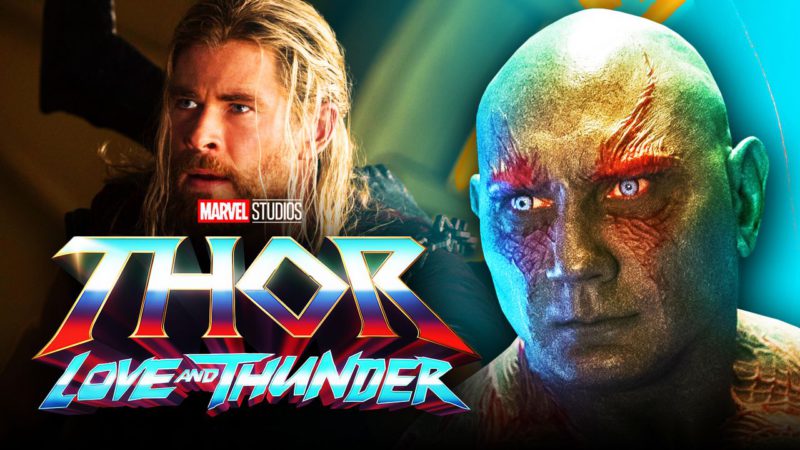 Dave Bautista has dropped a hint that Drax the Destroyer will appear in Marvel’s upcoming blockbuster Thor: Love & Thunder.

Chris Pratt will also appear in the film, having previously starred in the Guardians of the Galaxy and Avengers films as Peter Quill, also known as Star-Lord.

It seems likely that the return of Star-Lord along with Thor would mean that the rest of the Guardians are also close, Dave Bautista kept his lips almost sealed when asked about the subject on The Jonathan Ross Show.

Will Drax be in Thor: Love & Thunder?

However, the 52-year-old actor seemed to strongly hint that Drax the destroyer could be part of the long-awaited sequel, as he hinted speaking via video chat:

However, he added that “by coincidence” he was “on a jet with the rest of the Guardians with Chris Pratt who can confirm, and he did confirm. “But we were there together.”

“And then we traveled around Australia together. And we went and quarantined ourselves together. And then we all left at the same time, coincidentally. So yeah, there is a possibility,” he said.

Dave Bautista has worked with the director of Thor 4 before, having previously starred in an episode of What We Do in the Shadows. He recently talked about Drax’s future in the MCU.

As we revealed to you at the time, the actor said that it is not likely that he will continue to play the character beyond the third Guardians of the Galaxy movie.

During a recent conversation with Metro.co.uk, the former pro wrestler also explained how he changed a key scene in Army of the Dead, the zombie movie directed by Zack Snyder and recently released on Netflix.

His character, Scott Ward, forced to kill a loved one after he turns into a zombie, originally played out without any emotion. After a chat with the director, the scene was altered to be “such an emotional moment.”.

Regarding his future at Marvel, the studio has also not confirmed whether Dave Bautista will be in Thor: Love & Thunder, or that his last film as Drax the destroyer will really be Guardians of the Galaxy Vol. 3.

Henry Cavill Responds To ‘Girlfriend’ Gossips Over The Internet