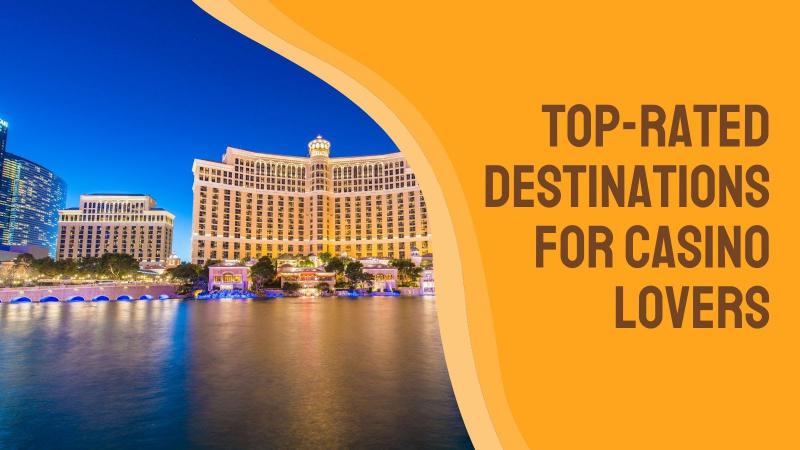 Have you ever wanted to experience the thrill of gambling at some of the world’s finest casinos? Have you tried looking up such places that could satisfy your extravagant needs? Well, we will tell you just about the places you need to know.

In this article, we’ll show every online casino in Europe and the world. A money maker’s dream. From Europe to Asia, based on market research and region here is a list of casinos that you must remain aware of.

Officially known as Casino de Monte Carlo, it has a range of gambling and entertainment options. Casino Monte-Carlo, the Opéra de Monte-Carlo, and the headquarters of Les Ballets de Monte-Carlo are among its attractions. First opened 158 years ago in the year 1863, a land-based casino, the Casino de Monte-Carlo is preserved and run by the Société de Bains de Mer de Monaco. The Monaco government and the current ruling royal family share mutual accountability in running the casino, which also owns a lavish spa, hotels, sports, and nightclubs.

It is also worth mentioning that in popular culture, The Monte Carlo Casino served as the location for numerous James Bond movies which include, Never Say Never Again, GoldenEye, and the Daniel Craig starring blockbuster Casino Royale.

Read Also  Canada - A Land for Students to Learn, Travel, and Enjoy Living

It is one of Italy’s oldest casinos. On the shores of Lake Lugano, Campione d’Italia is an Italian exclave of the Swiss Canton of Ticino, as well as the largest employer in the town. When the First World War was underway, in 1917, the casino was founded as a place to gather and exchange information with foreign diplomats.

This casino moved to new premises in 2007, with architecture designed by Swiss architect Mario Botta. With over 55,000 square meters (590,000 square feet) of floor space on 9 floors and 3 levels of underground parking, the new casino can accommodate 56 tables and 500 slot machines. The Casinò di Campione is certainly worth paying a visit.

There are 41 casinos in Macau (as of 2019), with The Venetian Macao as the largest. A total of 24 casinos are located in Macau, while 17 others are located in Cotai, and all of them are affiliated with the government and operate under a set of rules.

In the municipality of Cascais, Portugal, this casino is located on the Portuguese Riviera. It was built in 1916 by a venture launched by the then-President Dr. Bernardino Machado, who laid the first stone. The place was reputed to have been a gathering spot for spies, dispossessed royals, and wartime adventurers during the Second World War.

A modernist building, located in Estoril’s coastal area, in the municipality of Cascais, 18 kilometres (11 mi) southwest of Lisbon, it has a modernist design.

It is legal to gamble in only four subject areas of Russian geography, but in 2009 all other areas of the country were made illegal. There are only four zones specifically arranged in the Altai, Krasnodar, Kaliningrad, and Primorsky regions. It is estimated that there are 58 casinos, 2,000 gaming rooms, and 70,000 slot machines in Moscow after 2002. By 2004, each region was allowed to determine its own gambling tax rate, within the limits provided by Law #142-FZ. Slot machines that awarded cash winnings had a tax rate of 1,500 to 7,500 robles, and gaming tables, totalizator cash desks, and bookmakers cash desks had a tax rate of 25,000 to 125,000 robles.

Read Also  How to Host a Clothing Swap Party

Boomerang Casino, Kaliningrad Sobranie Casino, Magic Crystal Casino Amberland Kaliningrad, and Nirvana Casino Azov-City are amongst the popular casinos in Russia that you should definitely be familiar with.

Although gambling in most of the United States is legally restricted, it still remains amongst the chart-toppers when it comes to market profit and global popularity.

There are currently over 1,000 casinos in the United States, making it the world’s largest casino market. There are more casinos per capita in Las Vegas Valley than anywhere else in the United States. Revenue-wise, Atlantic City, New Jersey, and the Chicago region take the runner-up and third places, respectively. The top American casino markets by revenue that are worth mentioning are Las Vegas Strip with $6.348 billion, Atlantic City with $2.426 billion, Chicago region with $2.002 billion, New York City with $1.400 billion, Detroit with $1.376 billion, Baltimore–Washington Metropolitan Area with $1.306 billion, Kansas City with $782.05 million, and Shreveport with $732.51 million.

Well, there you have it. These travel destinations mentioned above are definitely worth paying a visit to. A list that shall suffice the needs of a casino lover, looking to globalize their gambling activities.

Outer Banks Season 3 Release Date Rumors: Everything We Know About The Series