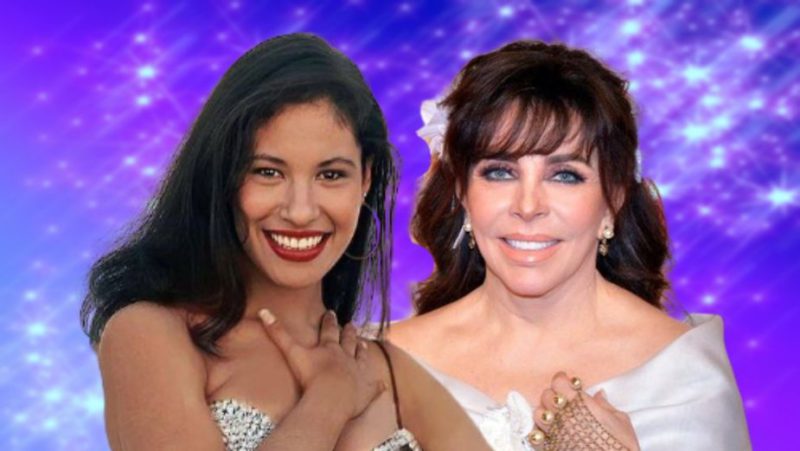 Selena Quintanilla conquered the Mexican public in the 90s. Her popularity was beginning to be so great that she appeared in one of the most important programs of the time, ” Y Vero América ¡Va! ” Hosted by actress  Verónica Castro, who in was all an institution in the artistic environment. For this reason, the queen of Tex Mex gave him some luxurious gifts.

The first time that the interpreter of “Como la flor ” and the Mexican host met was in 1992, when the Texan appeared on the broadcast with her group, Los Dinos. During the conversation, Selena explained the musical style of the band, its origin and how now they were reaping great successes.

After talking about the group, the interpreter of “Si una vez” filled the actress with gifts; She first gave her a black bag from the “ La Carcacha ” fan club , later she demonstrated her talents as a designer, as she gave La Vero a costume jewelery set consisting of flower earrings, a hat and a belt, which Selena had made .

All the items were full of stones, but what would now increase their value is that it was one of the first designs of the Texan singer and, of course, that they were a special gift for Verónica Castro.

Approximately a year later, Selena met the protagonist of “Rosa Salvaje ” again, this time it was when she appeared on the Musical Fury program. At that televised meeting, the Texan gave away one of her original designs and expressed her desire to open a boutique.

Before the present Verónica Castro was delighted and assured that she felt “a little, like the godmother” of this new stage of the singer.

Outlander Season 7: Announced! Here’s What You Must Know