Warriors coach Steve Kerr explodes against the shooting in Texas: “When are we going to do something?” 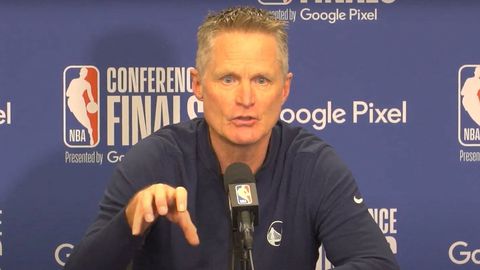 No basketball questions. Steve Kerr, coach of the Golden State Warriors, did not want to answer questions about the game during the press conference he gave on the occasion of the game between his team and the Dallas Mavericks, in the NBA Eastern Conference finals (Dallas won 119-109 and the Warriors continue to dominate the series 3-1). The Texas massacre, in which a young man killed 19 children and two teachers, provoked an emotional reaction from Steve Kerr.

“Any basketball question doesn’t matter. In the last 10 days, we’ve had black seniors killed in a supermarket in Buffalo, we’ve had Asian churchgoers killed in Southern California, and now we have children killed in school. When are we going to do something? Stop it. I’m tired of coming here and giving condolences to the devastated families out there,” said Kerr, who has long been in favor of tightening gun laws in the United States. Kerr also lost his father to an attack on January 18, 1984. Malcolm Kerr, who was a professor of Arab history, was killed by two members of a radical Islamic group, who shot him twice in the head while working as a rector at the American University of Beirut.

Read Also  How to watch 2020 Tokyo Olympics in Canada

“Do they realize that 90% of Americans, regardless of political party, want more background checks [for gun buyers]? 90% of us. We are being held hostage by 50 senators in Washington who refuse to put it to a vote, despite what the American public wants. They won’t vote for him because they want to hold on to his power.”

Lakers star Lebron James also referred to the Texas massacre: “They are children and we continue to put them in danger at school. Where it’s supposed to be safest!” There can be nothing worse, this is a disaster,” added Dallas Mavericks player Luka Doncic.

Who is Matilda? The mystery behind Harry Styles’ new song