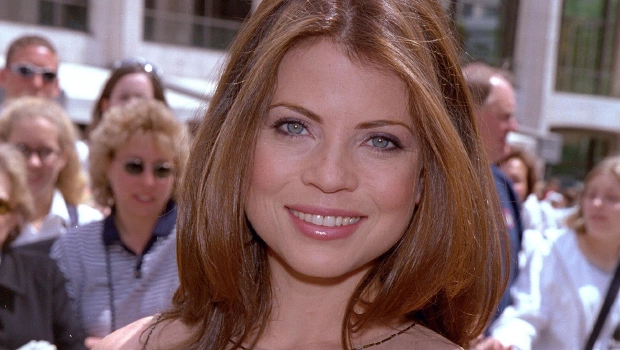 Yasmin Amanda Bleeth is a retired actress and model who gained prominence in the past from the role of Carolin Holden in the award-winning show “Baywatch,” which premiered from 1993 to 1997. Her other notable work was the crime drama TV series “Nash Bridges,” which aired from 1998 to 2000. In which she appeared as Caitlin Cross.

Even if Yasmine Bleeth’s name does not ring a bell for you, you surely would remember a drop-dead gorgeous beauty Carolin Holden in the most popular TV series of that time, Baywatch.

Although some Baywatch stars like Pamela Anderson and David Hasselhoff are still familiar names. Yasmine’s journey to fame has not been smooth as her other co-star.

Yasmine Bleeth used to be a household name in 1995 when she appeared on her Baywatch. She played the character of Carolin Holden, the younger sister of Stephine Holden, played by Alexandra Paul.

She was also the best friend of Pamela Anderson’s character CJ parker in a show.

Believe it or not, she was just as famous as her other co-star at that time. So how did one of the popular celebrities fall from grace, and what is she doing now?

Born in New York on January 14, 1968. Her father was Philip Bleeth, a business property; her mother was Carina Bleeth, a former model. Yasmine is Catholic.

She got Russian German Jewish ancestry from her father’s side, and her mother was of Algerian and German descent. She went to United Nations International School in New York City, but her acting career majorly affected her education.

How did Yasmine Bleeth’s Career begin?

Yasmine was working from a very young age. Her father was already friends with people like Arlo Guthrie and Alice Brook. Maybe that is why her parent gets influenced and took her to auditions when she was just ten months old.

Luckily, she got her first project at the same age and made her debut in Johnsons & Johnson’s No more tear TV commercial in 1969. When she was only ten months old, this was just the start.

She made her acting debut in the TV series Candid Camera at six. At the same age, she got another project, a Commercial for Max Factor Cosmetic, where she was cast alongside famous model Cristina Ferrare.

This cosmetic commercial leads her to Frances Scavullo, a famous photographer. He offered her and her mother to appear in his entitled book Scavullo woman, which they accepted. From the age of twelve, Yasmine has done numerous works in modeling and TV shows throughout her teens. Her projects include Hey Babe, Ryan Hope, and One Life to Live.

However, the main reason behind her success was the famous Baywatch show which earned her a spot in People’s 50 most beautiful Faces in 1995 and marked her as one of the 100 sexiest women in the World from 1996 to 2000.

During the success of Baywatch, Yasmine appeared in many guest roles on TV. She frequently appeared on every famous magazine cover as a swimsuit and lingerie model. Her other notable work was in “Nash Bridges.” She also appeared in the short-lived TV series “Titans” in 2000. Titan’s producer was so excited to have her in his show that his company convened CBS to release Yasmine early from Nash Bridges.

Read Also  Moana 2: Is There A Release Date Available?

Her name was frequently mentioned in other Blockbuster TV series, Friends, by the character Joy and Chandler. Although her career, which was once touched the height, turned down after the year 2000.

If something that has chiefly affected Yasmine’s career was her drug dependence. During Baywatch, many gossip columns speculated that she was doing drugs.

Also, former producer David Schwartz cited in his interview that Yasmine was fired from Baywatch because dealing with her was very difficult as she was doing drugs.

However, just one year later, she was arrested in a car accident where Police found a syringe with injectable cocaine. Later, when Police checked her hotel room, they found more cocaine and another drug.

Therefore, she pleaded guilty and was charged with a two-year probation and 100 hours of community service. Later in her interview, Yasmine described her addiction as a social habit that destroyed her health and career. She also denied getting fired from Baywatch and said her addiction problem only started when she worked on Nash Bridges. She felt isolated, and her publisher insisted on denying her rather than getting her help.

Read Also  The Eternals: What Is Angelina Jolie's, Giant Sword?

She told in her interview her wake-up call was when she collapsed during a photo shoot for Glamour magazine. Later she decides to quit acting to focus on her health and life.

She last appeared on television in 2003 on “Baywatch: Hawaiian Wedding.”

Even Yasmine Bleeth has been away from the public eye and her acting work for a long time. Her previous career was quite successful and has increased her worth by a large marge.

According to some credible source Yasemin’s net worth is high at $2 million, which is very impressive.

Where is Yasmine Bleeth Now?

Yasmine is now married and living happily with her husband, Paul Cerrito, whom she met during her first stay in a Rehabilitation clinic in Malibu in 2000. Paul is a former strip club owner and was present in the car accident of 2001, for which Yasmine was sentenced.

The Couple married in Santa Barbara on August 25, 2002. they have been on the mend since then and recovered quite a weight. Also, They have had no children from their marriage till now.

Yasmine Bleeth was once known for her beauty and made herself a solid fanbase in the’90s from Baywatch. Although her acting career was cut short due to substance abuse, people who were fans during her prominence are still intrigued about her.

But Yasmine is living her quiet and reclusive life with her husband and seems unbothered by a photograph that occasionally sprouts to click her.