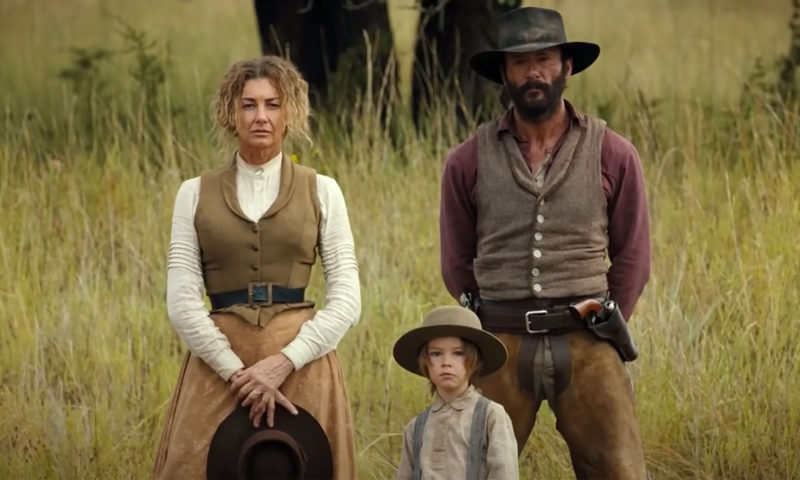 Paramount Plus is very soon releasing a prequel series to its neo-Western Yellowstone. The series titled 1883 focuses on the ancestors of the present-day Dutton family, who now owns a huge cattle ranch in Montana. The Taylor Sheridan series that stars the amazing Tim McGraw is all set to debut on Paramount+ on December 19th.

Now just a couple of days are left until the Yellowstone’s spin-off arrives or lands on Paramount+. The powers behind Taylor Sheridan’s prequel are now giving viewers great sneak peeks at what’s waiting for them is not just a series but an eclectic and gruesome series.

The creator of the show Taylor Sheridan, explained the story in a statement by saying:

“I was always fascinated when I came up with the story of Yellowstone about how do we make it bigger and expand it. This new show explores different eras of that 130-year legacy.“We see them when they were homesteading. When we say the Wild West, what that really means is a West beyond the reach of the rule of law. It really is the beginning of an empire before it was an empire.”

The Yellowstone prequel 1883 release date will soon premiere on December 19th on the streaming service Paramount Plus for all US viewers and subscribers. The premier’s schedule for the Yellowstone prequel is further behind in the UK than it is across the other countries. This implies that wair for 1883 could be longer in other regions.

Who’s in the Yellowstone prequel 1883 cast?

The Yellowstone prequel has been amazingly shaping up with a star-studded cast. The very famous Sam Elliot will play the role of Shea Brannan, a handsome cowboy with immense sadness in his early life. Joining him will be another grisly cowboy named Thomas, whose character will be played by LaMonica Garrett. Fans will also be seeing Country Music Ocon’s Faith Hill and Tim McGraw portraying the roles of patriarch and matriarch of the Dutton family.

Besides that, the actress Isabel May will be a star as the eldest daughter, Else. Billy Bob Thornton will also be playing the role of Marshal Jim Courtright in the prequel series. With this we can say the star cast is quite impressive for the series, and we can expect bang-on acting from them in the series as well.

The series is based out in the late 19th century and follows the Dutton family as they venture westward through the great plains of Montana. Eventually, they own and operate the state’s largest ranch. The entire family was determined to escape poverty and improve their family condition they began with “a stark retelling of Western expansion,” .

The official synopsis of the series from Paramount Network reads:

“Y: 1883 follows the Dutton family as they embark on a journey west through the Great Plains toward the last bastion of untamed America. It is a stark retelling of Western expansion, and an intense study of one family fleeing poverty to seek a better future in America’s promised land – Montana.”

Will 1883 be on Paramount Network?

1883 will be exclusively on Paramount Network’s new streaming platform, Paramount+, along with Yellowstone’s fourth season. Apart from that, there are a lot of other good shows available there, so if you sign up, and you might end up watching many other series as well.

So, this was all about the 1883 Yellowstone prequel coming on streaming platform Paramount+. As soon as new updates begin to drop, we will surely share it with you right here. Will you be watching the series? what are your expectations from it? Tell us in the comments section below.